Hastings had the most dramatic increase in assessed property value of any municipality in Dakota County in 2022.

Dakota County Commissioner Mike Slavik of Hastings told the Hastings City Council at its Dec. 19 meeting that assessments in the county were up 17 percent on average. However, the Hastings increase in valuation was 21.6 percent.

“Hastings was the highest valuation increase of any city in the entire county,” he said, noting that there was some catching up to do to get valuations at a level required by state law.

By law, assessments need to be between 90 and 105 percent of fair market value.

“We’ve kind of lagged a little bit in the past and there’s a little bit of catch-up,” Slavik said. Slavik said the county assessors look at property sales from the previous year in determining value. Assessments arrive in the spring. The most recent assessment looked at sales between Oct. 1, 2020 to Sept. 30, 2021 to determine values that are used on property tax statements payable this year.

In Hastings, when property tax bills arrived, some residents questioned their assessments. However, the time to do that is when assessments arrive, and it’s too late to ask questions in the fall.

Slavik said he hopes to speak to the council in the spring and perhaps bring an assessor with him to explain the process for any residents questioning their property’s value.

“State law requires that the valuation must be at market value,” said Slavik. “Some people say we can blame the Realtors, but the fact of the matter is values have gone up quite significantly, not only in Hastings but throughout the state the last 2-1/2 years.”

He said the current Dakota County assessments are now at between 93.595.4 percent of fair market value.

Slavik said the Minnesota property tax system is “complicated,” and he’ll try to explain the assessment process and options when assessment notices are received thoroughly for residents in the spring.

“I would bring our assessors and myself and take five-10 minutes with the City Council this coming spring and be able to talk about next year’s assessment process. We’re also very fortunate that there’s been a long history that the county assessor has been a resident of Hastings. With the county seat based in Hastings, we have a lot of county employees that live here,” Slavik said, joking that he won’t reveal the assessor’s address.

“They’re not the most popular people,” he said to laughter in the council chambers.

In addition to the bison now calling the park home, there are other improvements underway as well.

A herd of 15 bison were introduced to the park as part of a statewide DNR goal of introducing up to 500 of the animals on prairie land statewide.

Slavik said funding came from the Minnesota Lottery for the Spring Lake herd which are kept in paddocks in the park.

Dakota County reintroduced the bison to help restore, manage and diversify about 160 acres of prairie in Spring Lake Park Reserve. The bison graze on grasses, allowing wildflowers to thrive.

Slavik said a public grand opening will be held this spring for residents to get a glimpse of the majestic animals.

“I think it helps put Hastings on the map at a whole new level,” he said. “This has already drawn lots of people into the community.”

He said some viewing areas are right along bicycle trails.

He also said there is $4 million being spent on a master plan for the Spring Lake Park Reserve and Schaar’s Bluff within it.

“You’ll see about $4 million of upgrades and improvements. This winter, you’re going to see some of the natural resource work that’s best to be done in the winter,” he said. “You’ll see a lot of different changes over the next couple years.” 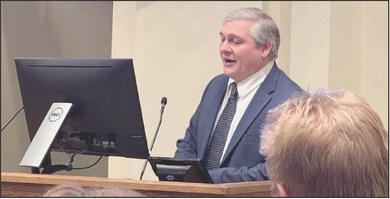 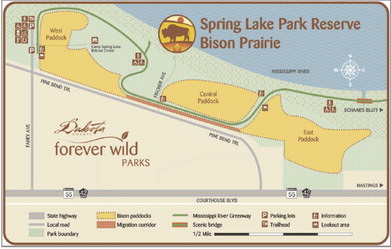 Most Read
News
Meeting Thursday on planned ‘life cycle’ development
A meeting will be held Thursday, Jan. 26 at the Hastings American Legion Post from 6-7:30 p.m. to introduce plans for a new housing development on pr...
A: Main, Main, News, School
Hastings School District food service workers intend to strike Feb. 7 unless agreement is reached
by Bruce Karnick [email protected] January 26, 2023 – Hastings MN. Negotiations between the Independent School District 200 (ISD...
News
Walden of Hastings
News
Chamber dinner celebrates success, honors three of community’s best
A packed house was on hand Thursday, Jan. 26 at the iconic Little Log House Pioneer Village as the Hastings Area Chamber of Commerce celebrated the p...
News
Black Dirt Theater returns with dinner theater featuring ‘I Love You, You’re Perfect, Now Change!’
Following the triumphant return to the stage with “Newsies!” in 2022, Black Dirt Theater is thrilled to continue bringing dynamic, lively and fresh t...
News
School food service workers intend to strike Feb. 7 unless agreement is reached
Negotiations between the Independent School District 200 (ISD 200) and the Service Employees International Union 284 (SEIU 284) have all but stalled s...
Public Notices
HASTINGS Police Reports
HASTINGS Police Reports January 16 6:44 a.m. - A two-vehicle accident was reported at the intersection of Highway 316 and Spiral Boulevard. One...
News
‘I’ve pretty much done it all’
[email protected] 35 years ago, George Michael’s “Faith” was topping the charts, the most perfect movie ever was in the theaters (The P...