The Minnesota Wild paid a special visit to Hastings High School on Thursday, July 28 from 6 to 9 p.m. The Wild Street Team put on a fantastic, interactive presentation for residents to partake in. The parking lot at HHS was filled with games to be played along with samples from Jack Links, the presenting sponsor. They even had a food truck, Northwoods Smoke House for people to buy dinner. HYAA was in attendance discussing hockey options for area youth and giving out treats and water to folks in attendance.

Jim Vanek, Senior Manager of Brand Activation and Events took a few minutes to discuss the Summer Series with the Journal.

“We are here with our inaugural summer street hockey series. The whole point of this is to get out into the community and bring the Wild Hockey brand to people where they live, as opposed to them normally having to come down to St. Paul to see us at our home at Xcel Energy Center,” explained Vanek. “The summertime obviously is a great opportunity for us because we aren't playing games, so we get the opportunity to get out and try to be in the community. We wanted to make sure that we were keeping hockey in the forefront of people's minds. Not that that's ever far from their minds here in Minnesota. But you know, there's become more and more competition in the sports world. As time has gone on, we have every major league in the United States is represented here in this market. So, want to make sure that we're not falling off the radar with people in the summer months. And we know that there are folks that are willing to come out and celebrate the game and the sport. We want to do that but also celebrate the communities themselves. Hastings being one that has a rich hockey history. We know there's a lot of fans here. And that's why we wanted to make sure that we got them on our list for the tour this summer as a way to celebrate them and celebrate the game.”

With this being the inaugural run of the event, there were the proverbial bumps in the road at the start, for example, the assembly of the video game booth. The first several attempts at setting up the video game booth took several hours as the crew fumbled through it, now, it can be done in under an hour. Even with the little learning curve for setting things up, Vanek said many things are going great with the tour.

“The community engagements been really good. We love having the Youth Hockey Association's presence at all the stops that we've been at thus far, they've had a really great opportunity to get out and just reconnect with people that they maybe haven't seen since last hockey season. It gives them an opportunity to promote upcoming fundraisers or even just registration for the fall to make sure that folks are aware of what's going on. And I think also the things that we've liked is just the gaming atmosphere here. I think having street hockey, we've got an interactive hockey net over there. That's kind of like target practice. We've got video games, we've got yard games, I think all of those things have just proven to be really great, we hit it on the head in terms of what people are looking to do in a summer evening,” added Vanek He was right, folks were out having a great time with all the different events. Events like this also open the door for feedback from visitors. Many people expressed additional things the Wild could do to make the event better.

“People always want the players to be here, of course. And we will certainly continue to always advocate for that. With our hockey ops department and PR staff,” said Vanek. “The truth is a lot of the guys just aren't around this time of year. But when we have the opportunity to get them, we'll certainly get them off the fence when we can. The only other thing is I think people just want us to come to more markets. I've received several emails or phone calls from people who've heard about the stops that we've done thus far and just want to find out how they can get their town on the list for next year. Hopefully we can do that. Hopefully we can expand and maybe have it run all summer long rather than just three or four weeks.”

If the success of the free event is any indication, Vanek and his crew will be very busy next summer running all over the state of Minnesota. They are doing it right with a great mix of MN Wild hockey and supporting local businesses and youth associations by inviting them to be part of the event.

If you missed out on the event in Hastings or if you want to go to an additional one, you have one more chance to go, Eden Prairie High School on August 4.

Eleanor Miller took aim at the slap shot game. Although she did not light up all nine squares, it was a fun experience and worth the 10–15-minute wait. Perhaps she is a future Whitecap?

Jack Polson shows off his goalie skills in the slap shot game. Yes, goalies can shoot too! Polson was taking in the event with his dad Craig. For the record, he managed to light up all nine squares with time to spare. Photo by Bruce Karnick

Liam Gallahue from Farmington was one of six kids playing 3-on-3 street hockey in the Wild’s inflatable street hockey rink. Gallahue scored several times showing off his Kaprizov-like moves. Photo by Bruce Karnick

The Wild mascot, Nordy was in attendance to take pictures with fans. Here is Nordy with (L to R) Ali , Dave and Jakoby Janssen of Hastings. Photo by Bruce Karnick 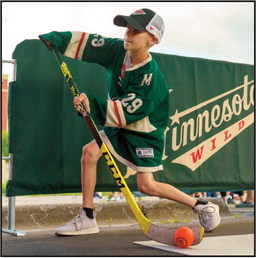 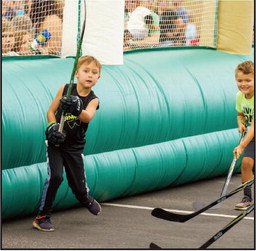 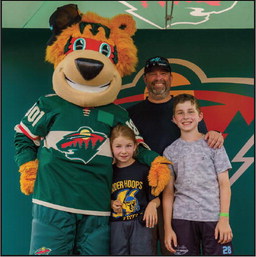