There was a large turnout for the Hastings School Board meeting on Wednesday, Oct. 26, some holding signs depicting sexually graphic images from a book available in the Hastings High School Media Center. Photo by Dan Solovitz
News
School Board faces silent protest at meeting

At the Oct 26 regular meeting, the Hastings Public School Board was met with dozens of local residents attending in civil, yet provocative, public protest. Placed throughout the considerably larger-than-normal crowd in attendance were many people holding up signs of various sizes, directed toward the board members for the entirety of the meeting. One concerned Hastings parent stood behind Superintendent Dr. Bob McDowell with her sign throughout the meeting. Some of the signs had hand-written messages, but the majority contained graphic illustrated images of sexual acts from a book that is currently available to students in the Hastings High School Media Center.

At issue was a graphic novel that was made available for checkout by students at Hastings High School in the spring of 2022. The book, Gender Queer: A Memoir by Maia Kobabe, features graphic drawings of sexual acts between young adults, depicting the use of toys and direct contact, showing reproductive organs engaged in acts in full view. One of the illustrations, which the book notes is based on Plato’s Symposium, shows what appears to be a young nude male in concert with an older, bearded nude adult male.

While the book is intended for ‘young adults,’ age restrictions have been placed on the book for checkout in various school districts around the country since its release, with some districts suggesting 16+ and others labeling it as 18+ material. With Hastings High School’s enrollment encompassing students aged 14 and above, the question of restriction was raised by a parent earlier this year and the issue has been a point of contention between many local parents and the school board since.

In June, Rachel Larson, Hastings School District’s Director of Teaching and Learning, formed a committee to discuss and review the book. The committee voted unanimously to keep the book in the school library. Based on the committee review, Larson recommended to Superintendent McDowell to keep the book available to students, and he lent his official approval to the committee’s recommendation.

An appeal to the board was requested in August by a concerned Hastings parent, which was dismissed by Board Chair Brian Davis, stating that the matter would not receive any further action. At the September 28 board meeting, a motion was made by Director Carrie Tate, and seconded by Director Jessica Dressely, to create an official appeals process for reviewing books made available in the school district. The vote on that motion was 3-3, with Tate, Dressely, and Chair Brian Davis in the ayes. Directors Beissel, Hedin, and Malm voted nay. Without a majority, the motion failed, effectively cancelling discussion on the proposed Policy Committee appeals process for review of materials in the school. However, another motion was made to potentially discuss sexually explicit materials in schools at a future meeting or work session, which passed upon vote.

Hastings School District Policy 206 was changed in August of 2021, effectively banning public comment during school board meetings. Residents interested in making their thoughts known are asked to either email the board directly, or arrive 20 minutes before board meetings to speak in private session with at least two board members, who then are to relay the resulting comments to the public during the meeting. With details often left vague in the public presentation of the pre-meeting community input, many parents and residents now feel that their comments no longer reach the public as intended. According to the local parents involved, the visual sign display at Wednesday’s meeting was intended as a way to have their opinions seen, if not allowed to be heard.

The board did not acknowledge the sign display, and no one in attendance interrupted the proceedings during the meeting.

After the meeting, a concerned parent in attendance said, “We all want the same thing, which is what’s best for our kids. That may differ between parents, but they’ve taken our voice away and silenced how we feel. We’re not allowed to protect our children. We just want our voice back. The board has the ability to at least put this up for a review or an appeal process, and they refuse to do that. So they are supporting this book, and I’m not sure what educational purpose it serves.”

Another resident added, “They’ve taken away our voice, and there’s nobody to hold the school board accountable, because we’re not allowed to speak.”

“It’s inappropriate,” said another parent. “Teachers voted this book into the school and approved it for 14 year-olds. If you’re appalled by seeing it at the meeting, you should be really appalled that it’s in our school.”

There is an open seat on the school board, recently vacated by Mike Reis, which is currently up for special election to fulfill the remainder of Reis’ term. Candidates for the seat have differing views on the availability of the explicit materials in books such as the one in question. According to the Pioneer Press, candidate Todd Kullman opposes the availability of explicit materials such as Gender Queer: A Memoir, saying, “It needs to come off [the shelves]”. He described the material as “vulgar and pornographic.” Candidate Mark Zuzek said, “My thought is that even though those sketches are in there, they are not harmful to the educational purposes of a person reading that would want to read that book. The book is important for kids that we need to serve and we need to protect.”

The Hastings High School Media Center currently retains a single copy of the book to be available for students to check out. No parental consent is required for a student to do so. Media Center staff said that the book has been checked out only one time since its purchase by the library.

Superintendent McDowell declined comment after the meeting, but on October 30, he released the following ‘Message from the Superintendent’ outlining his position on the book topic: “Books In Schools Activity at this past week’s School Board meeting, as well as recent social media activity, has prompted questions and suggests a need to ensure the community has accurate information regarding a book challenge.

The ISD 200 School District has a process for reviewing books and instructional materials, which is outlined in School Board policy 606.2 TEXTBOOKS AND INSTRUCTIONAL MATERIALS RECONSIDERATION OF TEXTBOOKS OR OTHER INSTRUCTIONAL MATERIALS. This policy was reviewed by the District’s Curriculum Advisory Committee, and most recently approved by the school board during the fall/winter of 2021. The Curriculum Advisory Committee membership includes both staff and parents.

The process outlined in policy 606.2 states that a committee, composed of district and building administration, teachers, a member of the Curriculum Advisory Committee, a parent, and a media specialist, will convene and follow the review process. The people on the committee must read the entire book—not just one page or one sentence. The questions that guide the committee’s discussion include looking at scholarly reviews and state standards. The committee members then report a finding and recommendation to the superintendent.

This process was followed, for the book Gender Queer, during the summer of 2022, and the finding and recommendation was to keep the book on the shelf.

As for the book itself, the school district maintains one copy of the book in circulation, which is only available from the high school library. The book is not taught in classes, nor is it available at the other buildings in the district.

People in the community have different views on this book, and some would like to see an appeal process added to the policy. The School Board has heard various viewpoints on both the book and an appeal process, and is expected to consider ‘appeals’ as part of a future discussion, as well as any direction for the policy committee.” 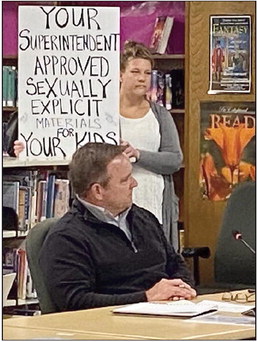 A Hastings parent stands behind Superintendent McDowell with sign during school board meeting. Photo by Dan Solovitz. 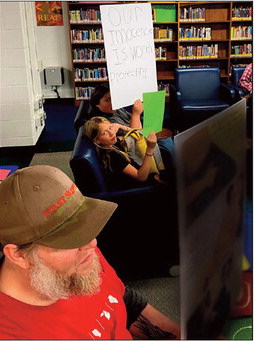 Hand-written signs and printed graphic signs at the meeting. The Journal obscured the man’s sign for publication. Photo by Dan Solovitz.