The Suite Living development was forwarded from the Hastings Planning Commission to the city council for approval last week on a 3-2 vote. Rendering courtesy of City of Hastings.
News
Senior housing rezoning plans raise ire of Terry’s Hardware

The Hastings Plan Commission forwarded a recommendation to the city council to for a rezoning of property to make way for a senior housing complex adjacent to Terry’s Hardware, which opposes the move.

The plan commission vote was 32, with Melanie Peters and Todd Matzke voting against. In favor were Chris Teiken, Rob Halberg and chair Gino Messina. Two members were absent from the meeting.

On Monday night, a first reading of the rezoning change was approved by the Hastings City Council. A second reading and final approval is set for the Oct. 3 council meeting.

Suite Living would be comprised of 32 assisted living and memory care units.

A first reading of the ordinance for the zoning amendment change from Regional Shopping Center to High Density Residence was held by the Hastings City Council Monday night and approved. The final reading and adoption are set for Oct. 3. The city Comprehensive Plan also needs to be amended to note the property use change.

The property is located southeast of 33rd and Vermillion Streets and would be developed by Jeremy Larson of Hampton Companies.

The parcel is 2.71 acres, and one of the current property owners, Ed McMenomy, told the planning commission he has tried to sell the property for more than 20 years.

“We have not gotten one inquiry for anything on that property in 22 years. I just wanted you to know we’ve done everything we can,” he told the planning commissioner. “It was 10 years old before we bought it, and we bought it in bankruptcy.”

The planning commission was sent a letter in opposition from Charles and Peter Terry of Terry’s Hardware Inc., who oppose the change in zoning to residential.

“We believe that it is inconsistent with sound land use and development principles, and detrimental to our business and property,” the letter states. “The subject property possesses the characteristics that make it best suited for commercial use access, visibility, proximity and massing of other commercial uses. The City of Hastings is projected to experience continued growth through 2040, and it is reasonable to assume that growth will continue beyond 2040 as well. The majority of the growth is planned to occur on the south end of Hastings in relative proximity to the site.”

It continued, “The proposed use on the subject property does not require the access, visibility, traffic count. etc. that are characteristics of the site which is more suitable for a commercial use. In fact, it eliminates one of the more prime commercial vacant properties within the community while putting a residential face on a key commercial area within the community.”

Having the residential development there also changes the feel of the neighborhood.

“The proposed use continues to promote an essential change in the character of the area – from commercial to residential – especially in such a prominent location,” Terry’s wrote.

“Our family has built the business over the last 45 years. Of those, 31 have been in Hastings, providing goods, services, and contributing to the commercial tax base of the community. We have provided both fulltime and parttime employment for several hundred local individuals and provided the primary employment for many households. During that time, we took a vacant building that was in decline, reinvested and expanded our business. We supported community events and local nonprofits, youth organizations and sports, as well as numerous benefits for local residents in need. We also support local law enforcement. We are and have been a good corporate citizen that serves our community and supports or neighbors. We have pushed through recessions, pandemics, labor shortages and supply chain issues. And, we intend to continue to serve Hastings long into the future.

“In short, we believe the Comprehensive Plan Amendment and Rezoning to be a bad idea, nearsighted and contrary to the longterm interest of the community and our business. If this application moves forward in the rush to pander to those who might invest in the community, the city would be neglecting those who already have.”

Community Development Director John Hinzman told the plan commission that while the Comprehensive Plan currently shows it as commercial use, the city’s Vermillion Street Corridor documents identifies residential use there.

Matzke voiced the opinion that the area south of there will be where there will be residential growth coming, so the property should stay commercial.

“Do you not believe there’s going to be more traffic south on 61 or more building south on 61 that you’re willing to write off this property?” he asked Hinzman. “In my opinion, it would make more sense if it would stay commercial. When we automatically just flip our comprehensive plan, it doesn’t seem like it’s a great idea. It does seem like it would be more ideal for a commercial site.”

Peters said the fact that two city planning documents had conflicting uses for the site was confusing.

“It’s unclear to me what the intent of the city is. It’s hard to interpret,” she said.

Halberg said the facility will look nice on the property for people coming into Hastings on Hwy. 61, as opposed to the vacant lot.

“I do think this would be a good fit,” he said. “We create these plans, but plans change. I think at the end of the day, this kind of usage is a much better fit than a fourstory office building that sits empty and is an eyesore. They’re nice looking facilities. They add to the area, not detract.” 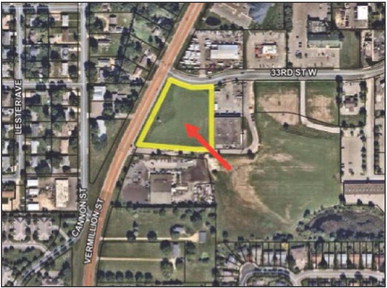 The above graphic shows the location of the planned Suite Living development. Terry’s Hardware owners have objected to rezoning the parcel to make way for the high-density residential use and to a change that needs to be made to the city Comprehensive Plan. Photo courtesy of City of Hastings