A fireman sets up a fan to help clear the smoke from the home in hopes that the homeowners can enter the property safely to gather needed belongings before finding a safe place to stay. Photo by Bruce Karnick
News
Home fire displaces family
One hurt, Red Cross offers aid

Approximately 1:30 p.m. on Wednesday, September 14, the Hastings Fire Department received a call for a structure fire in Villa Court. Five people normally reside in the home, but only one was home at the time of the fire. That resident was transported to Regions Hospital to be treated for smoke inhalation and is expected to make a full recovery.

Assistant Chief Chris Paulson gave the rundown of the events after the fire was under control.

“We had a report of a structure fire,” Paulson said. “When we arrived, the backside of the house was on fire. We responded with a twoperson engine and one person in an ALS ambulance. We were a little shortstaffed to begin with. We were helped with an engine from Prescott, a ladder from Cottage Grove and a lot of our offduty personnel, but we were able to knock the fire down, pull the ceilings down in the kitchen area for the attic fire and get the fire contained. We believe the fire started on the outside of the house. The cause is under investigation.”

When the Journal arrived on scene, the fire was extinguished and there was little to no smoke emanating from the home. The homeowners and family were in the back yard making the needed calls, minus Tim Sindt, who was at Regions Hospital being treated for smoke inhalation. Insurance Agent Tony Ciro was even on site to help guide the homeowners through the process of contacting the insurance company for a place to stay and needed supplies. A call had already been made to the American Red Cross, and they were on site to help too.

Red Cross Agent Jeff Thelen explained their part in helping a family get through a home loss.

“What we're trying to do is fill in for the first 24 to 48 hours, you know, make sure that they are safe, they have some shelter, and possibly offer some financial assistance if that's what is needed; just cover them for the first two days or so just to kind of get them to reset,” Thelen said.

Between the insurance agent on site and the Red Cross being involved, the homeowners were in good hands for the night provided they could get in and get some of their necessities from the house. Assistant Chief Paulson explained what the fire department does to help facilitate the retrieval of needed items.

“For the essential things like medications and things like that if we cannot grab them, we will try to get them into the house to find their things as long as it is safe for them to do so. That is what we are working on right now, making sure that the air is safe enough for them to come back in. Otherwise getting back into their house is really tough these days because contractors are few and far between and people wait a considerable amount of time for the repairs to be started,” he said.

There were no First Responders hurt in the response to the fire. 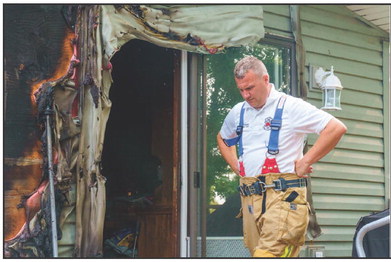 Assistant Chief Chris Paulson surveys the site for any flareups along with safe access for the homeowners to enter the property. Photo by Bruce Karnick

Latest News
News
City tax levy increase will be 6.6%
By John McLoone A difficult budget year was aided by the fact that Hastings homes increased in value by 23 percent in the last year. As a result, ...
News
Hastings appears to have won for Intek development
By John McLoone The City of Hastings appears to have been successful in its quest to keep an expansion of Intek Plastics here. The company also...
News
TLC receives new ultrasound machine
By Bruce Karnick [email protected] TLC (Total Life Care) of Hastings, is a pregnancy resource center that serves the Hastings community...
News
Time
By Bea Westerberg Fall happenings “Opening your eyes to see a new day is a good thing.” - Unknown I think the Duluth/Proctor area is all safe...
News
Senior housing rezoning plans raise ire of Terry’s Hardware
By John McLoone The Hastings Plan Commission forwarded a recommendation to the city council to for a rezoning of property to make way for a senio...
Obituaries
Obituaries
Ronald Boucher 1936-2022
Ronald “Ron” Boucher, 85 of Hastings, MN formerly of Colorado Springs and Apache Junction, passed away peacefully with his loving wife by his side on...
Obituaries
Michael Jenson 1949-2022
On Friday, Sept. 16, 2022, Michael Vernon Jenson, beloved husband, brother and uncle passed away at the age of 73. Born in Red Wing, Minnesota, to Ve...
Obituaries
John Kinney 1971-2022
September 13th, 2022, John Kinney (Stoney), 50, of Hastings, MN, died in his home after battling cancer. He left this world being held by friends and ...
Obituaries
Charlie Lindberg 2003-2022
Charlie Robert Lindberg, age 19, died peacefully at home with his dog Ruby by his side. Charlie was born Jan. 15, 2003, to Brent and Anne (McDouga...
Obituaries
Irene Smith 1927-2022
Irene Smith, 95, of Hampton passed away peacefully in her sleep on Sept. 3, 2022 at Regina Care Center in Hastings. She was born on July 31, 1927 to ...
Read Our e-Edition