The honor guard fired a three round volley before the StarSpangled Banner for a crowd of several hundred people waiting to shop like it was a Black Friday event.

“It was pretty remarkable to see that many people lined up here on a Friday morning. We weren’t sure what to expect now that school already started at 7 a.m. in the morning. But the town of Hastings definitely showed up for us,” said store General Manager Kyle Cupp.

After the anthem was performed, Cupp thanked those in attendance for making the crew and company feel so welcomed in Hastings. He then went and did a ribbon cutting in the way only Fleet Farm could. They cut a log in half with a chainsaw instead of a ribbon with giant scissors.

Once the log cutting was complete, Cupp asked for the crowd’s patience to allow the staff outside a chance to get in position to welcome the shoppers. That took all of five minutes and the doors were opened early. Customers were greeted by several store employees, assistant managers and area managers while Cupp oversaw the sales floor. The first 500 customers were given a free Fleet Farm hat as they entered, and a line quickly formed at the kiosk for entering drawings.

Jessica Dodge, Program and Communications Manager for the Hastings Area Chamber of Commerce, gave a quick glimpse of what it means for the community to have an awesome partner like Fleet Farm.

“I think it means a lot for the community. They’ve come in and been so supportive of so many different areas of the town. The support of the school system, businesses in Hastings, it really brings together some camaraderie. Obviously, they filled the eyesore of an empty building as you come in on Hwy. 55 which means a lot too, but it is really a boost to the town,” she said.

“I think we needed something big like this in Hastings to compete with Menards and all that. Now you don’t have to go out of town. You can do everything in town,” said Jim Murtaugh.

Ann Suby and Elaine Lukowicz came in to see the new store.

“Well, obviously the community is very excited about it,” said Suby. “With the lineup of people here for the Grand Opening, it reminds me a little bit of the day after Thanksgiving sales, Black Friday. I think it’s very important. I think they’ve been wanting a store like Fleet Farm for a long time. Oh my gosh, it scares me a little bit because this is my husband’s favorite store. He calls it the ‘man mall,’ so it scares me being this close to home.”

Of course, she laughed as she finished her statement.

Lukowicz added, “I think it’s excellent for the community, we need some place where we can go to get some different things. Look at the diversity of the things they have” Cupp commented on the feedback he has been receiving about the store during the soft open.

“Everything’s been great. Customers are excited that we’re here. They’ve been coming up telling us how nice the store is. They love the assortment. They love our sporting goods. We’ve gotten a lot of compliments. We have canning. People have been talking to us about that. We finally have canning jars in Hastings again. We are seeing a lot of sales in our lawn and garden department. People are getting their yards ready for the winter. Our grills everyone’s loving our grill selection here,” he said.

Cupp finished by reminding everyone to stop in and register for the sweepstakes that are happening all month long.

Fleet Farm certainly has been a hit and it is generating a lot of excitement in Hastings. Make sure you stop in and check it out. 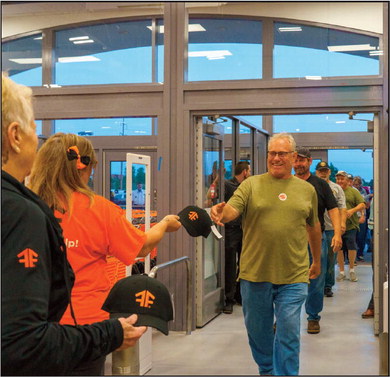 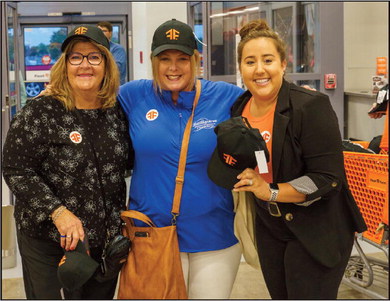 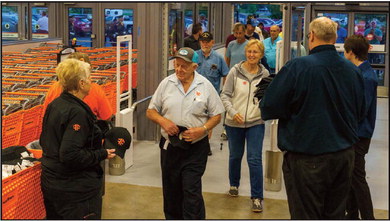 Hundreds of people waited outside to be the first through the doors as part of the Grand Opening of the new Fleet Farm in Hastings. Guests and staff were all smiles as people made their way into the beautiful new store. Photo by Bruce Karnick

The VFW Honor Guard stands ready to fire a three shot volley as part of the ceremony outside of the new Fleet Farm in Hastings. Photo by Bruce Karnick