Recently, I met with Dale Lewis and Connie Misener at a local coffee shop to talk to them about being named Hastings Prescott Arts Council Arts Heroes. They will be honored at the 12th Annual HPAC Gala on Sunday, December 4th, 2022, at the Hastings Arts Center. I, and many others, am grateful to Dale and Connie for their significant contributions to the arts in our communities over the years.

When Connie Misener was in 7th Grade, she was awarded a scholarship by the local arts association in Oswego, NY to take painting lessons with a well-known artist. She says it is like the HPAC scholarships that are offered today for art and music. She credits that experience with helping her to recognize her aptitude and love for painting. She graduated from SUNY Buffalo State College and in 2006 moved with her husband to Apple Valley Minnesota from New Hampshire. She painted murals and worked in restorations as a guild member of the Historical Society of Early American Decoration. She also worked at the Emporium in Hastings and got to know people who were in HPAAC.

In 2012, Connie began to paint with other artists in the “Little Colony” each Thursday morning at the Prescott United Church of Christ building. The group became even more important to Connie when the pandemic hit. During this challenging time, the Little Colony artists often went outdoors and painted ‘plein air’ to be safe. Or they spread out in the building, wore masks, washed their hands, and painted inside. The pandemic strengthened the friendships between these artists, and they continue to meet weekly. Through Connie’s connections with the Little Colony and Orange Dragon Gallery in Prescott, and Artspace in Hastings she has become a well-known and respected artist, not only in Hastings and Prescott, but throughout the United States. Connie would describe her art as representational, consisting of personal still lifes, landscape locales, and some figurals. She loves the richness and flexibility oil paints provide, both on canvas, board, and oils almost exclusively. Connie’s work is seen in Florida, the East Coast, and the Midwest.

Dale Lewis grew up in St Paul Park and graduated from Park High School. Dale was in the Navy for four years and began his career at Unisys. When Unisys experienced a down-turn, Dale went to school and learned to build specialized machines. As Dale found time, he explored using tile mosaics and then moved on to metals and found objects such as spoons and forks. In his garage, Dale began to design magical creatures, scraposaurs, wild beasts, fish, and other objects. Dale uses primarily stainless steel in building his creatures, but depending on his idea, he will use other steel as well. His tools are basic metal working, welders, plasma cutter, hand shear, rerod cutter and sanders and grinders.

Ten years ago, when these metal creatures and creations began to appear in the Hastings area, Hastings residents asked Dale to create something for them. One thing led to another and soon, Dale’s work was seen in both private and public locations. Dale enlisted the help of his friend Mecca Page and she became his agent. Together they have confronted the challenges of installing giant creatures and working with municipalities across the country. One solution has been the Traveling Exhibits program where fourteen sculptures are transported by semi-truck and installed in a large park or area. Currently Dale’s sculptures are at the Sioux City Lewis and Clark Interpretive Center until May 2023. Today, Dale can focus on his sculptures while Mecca conducts the business of arranging, transporting, and setting up these giant figures around the country. She also designed a photo book of Dale’s art, titled 101 Ways It’s Ok for Fine Art to be Fun and had it published. 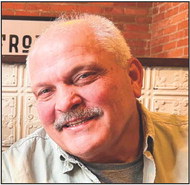 Latest News
News
HOMELESS in Hastings
This is the first of a two-part series. Next week’s installment will talk about agencies that help the homeless and how the community can best help. ...
News
Incoming school board member arrested for intoxicated driving
Hastings School Board Directorelect Mark Zuzek was arrested in Woodbury on charges of driving while intoxicated on Thursday, Nov. 17 at 8:53 a.m. ...
News
‘Protect Your Family from Illicit Fentanyl’ program presented by the United Way of Hastings on Dec. 1
On Thursday, December 1, 2022, the United Way of Hastings (UWH) is offering a free educational event highlighting the dangers of opioids and illicit...
News
Where Faith & Fitness Come Together!
ReDO fitness is located in the bottom level of Shepard of the Valley Lutheran Church at 1450 West Fourth St. in Hastings and they are facing challenge...
News
ANNOUNCEMENTS
Gobble Gait Thanksgiving Day Run/Walk - 11/24/22 8:30 a.m. Gobble Gait is celebrating 25 years of raising money for Hastings Family Service. The ra...
Obituaries
Obituaries
Steven George 1963-2022
Steven George passed away suddenly on Monday November 14, 2022. He is survived by his wife Carrie George of 24 years, son Raymond George(Jordan) ...
Obituaries
John Peine 1923-2022
John Aloysius Peine, age 98, passed away peacefully surrounded by family on Nov. 17, 2022, at Regina Senior Living in Hastings, Minnesota. John was b...
Obituaries
Mary Ann Radke 1944-2022
Mary Ann Radke 1944-2022 Mary Ann Radke age 78 of Hastings passed away surrounded by loved ones Nov. 19, 2022. Born Feb. 7, 1944 to Ben a...
Obituaries
Darold Brockman 1937-2022
Darold G. Brockman, age 85, of Vermillion passed away surrounded by his family on November 19, 2022 after a lengthy battle with Parkinson’s disease. ...
Obituaries
Laurie Boston 1959-2022
Laurie lost her short and sudden battle with a rare and aggressive Ovarian cancer at St. John’s hospital on Wednesday November 9, 2022. Laurie J...
Read Our e-Edition