Gobble Gait is an 8k and 2k run/walk held on Thanksgiving morning that began in 1998 to support the programs and services at Hastings Family Service (HFS). 25 years and still running, Gobble Gait has become a community tradition for many families and has raised over $1.6 million to provide help and hope in the community.

The idea of Gobble Gait began with a conversation between friends and business owners Mary Fasbender and Jay Kochendorfer as they wanted to make a difference in their community. Brian Radke was recruited to help and together, they and their families have poured time and energy into building it year after year into what is now one of the largest Thanksgiving Day races in MN. Hastings now hosts close to 3,000 participants each year, growing from a race that raised $4,600 and 520 pounds in 2009 to over $100,000 and hundreds of pounds of food each year.

“One of the things we are really proud of is that we’ve been able to do it with minimal costs because of the generosity of our sponsors,” says Fasbender, who now serves as the Mayor of Hastings. “Vermillion Bank has been a presenting sponsor since the beginning and hundreds of businesses and community members support Gobble Gait each year.” Anderson Race Management is on board to bring the 25th race to the next level after previous years grew so large and participants have requested an easier online registration.

According to Amy Sutton, Executive Director at Hastings Family Service, Gobble Gait has been instrumental in helping HFS respond to the growing and changing needs of neighbors in the community.

“HFS would look very different today if it wasn’t for the support received from Gobble Gait each year,” said Sutton. “It is such an incredible way for the entire community to come together and make a difference for our neighbors!”

Sutton also credited Mayor Mary, Kochendorfer and Radke with building a successful event because of their unique combination of entertainment, financial and leadership skills along with community relationships, generous hearts and hard work. “There aren’t many people who could pull off an event of this magnitude for 24 years, although they are quick to give credit to the community, volunteers, sponsors and participants,” says Kelly Carter, Development and Community Relations Coordinator at Hastings Family Service. “Everything we are able to do at HFS is possible because of the community’s support.”

The organizers and HFS staff invite the community to celebrate with them on Thanksgiving morning. Race organizer Kochendorfer says that downtown Hastings will be rocking with music and local businesses will be open, and Radke invites people to register and enjoy the beautiful course by the river. Former NFL player and Hastings High School graduate Ben Utecht will kick off the race with the National Anthem before the race begins at 8:30am with runners, walkers, families, pets, costumes, neighbors and friends!

Gobble Gait will be celebrating 25 years at a time of great need. HFS has reported providing as many full food shelf orders by the end of August this year as they did in all of 2021. If you would like to begin your day of giving thanks with celebration and community, please register at Gobblegait.com. 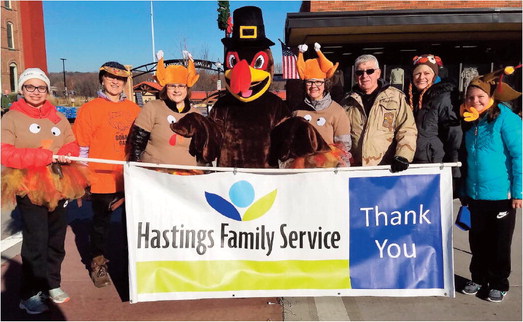 HFS staff, Board members and volunteers help to make the event happen every Thanksgiving morning! The little turkey on the left, Taylor Sutton, has been at Gobble Gait with her mom since 2009 when she was in kindergarten and began serving as Mercy the turkey mascot last year! Photo submitted