The flag from above towers over the Confluence Deck on the Mississippi. Photo submitted.
News
Events around town tie into Veterans Day to honor those who served

Veteran’s Day is a day we thank those that served and are still here to tell us about it. It is a day we as a nation set aside for these special people who signed that blank check and repeated the oath to protect this country from threats both foreign and domestic. Retired or Active Duty does not matter, that oath does not have an expiration date. Even those of us who were medically discharged hold true to that oath and we always will.

Hastings has a proud history with its military members, our town being named after Brigadier General and former Governor, Henry Hastings Sibley. We have several military based displays in our parks, we have Veterans Park, we have the United Heroes League and their Heroes monument, the VFW, the American Legion, all the photos and plaques they have and the Hastings Veterans Home. The ties to our veterans in Hastings run deep, so it only makes sense that multiple events take place on and around Veterans Day.

Thursday afternoon, the Hastings Area Rotary Club held an event on the deck of the Confluence by the river to unveil a brand-new flag for all of Hastings to enjoy. The new flag is massive at over 20 feet tall and more than 50 feet wide on an 80-foot-tall flagpole. The flag is one of the first things drivers will notice coming across the Hastings bridge. During the ceremony, there was a welcome prayer, Mayor Mary Fasbender, County Commissioner Mike Slavik, Hastings Bus Company owner and Confluence investor Pat Reagan and Rotarian Jeff Carlson spoke on the donation of the flag. River Valley band played the Star-Spangled Banner to kick things off and then played Taps to close out the ceremony.

Friday morning, just before noon, people began to gather at the United Heroes League property for their groundbreaking ceremony for their “Rink of Dreams”. The Rink of Dreams is an ice rink that will be built and ready for use next winter so that military families have a place to be part of clinics and special events put on by UHL in a very cool, outdoor rink. See page 3 for the full story on the Rink of Dreams.

On Saturday, the American Legion and VFW held their fundraising banquet at the Legion. Shane Hudella was the keynote speaker for the event that included a dinner at the Legion. 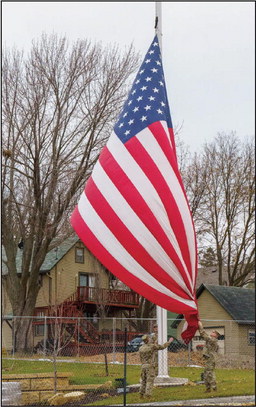 Soldiers present the flag donated by the Hastings Area Rotary Club to those in attendance of Thursday afternoon’s ceremony on the deck at the Confluence. Photo by Bruce Karnick