Operation Lifesaver – Rail Safety Education promotes rail safety week for the week of September 19-25 this year. Rail safety week features seven themed days to bring awareness to the fact that every three hours, either a pedestrian or a vehicle is struck by a train in the United States. That is nearly 3,000 accidents per year between a train and something external.

Monday kicked off rail safety week with the theme “#STOPTrackTragedies”. The theme is simple. Bring awareness to people to remember, when you are on or near tracks, expect a train.

The interesting piece to the presentation was an accidental demonstration of just how quiet a train is in the grand scheme of environmental noises. According to a Purdue University study, a diesel train traveling 45 mph is 83 db (decibels) 100 feet away, which is less than an average food blender at 88 dB. A lawn mower is more than four times as loud as a train at 100 dB. 70 dB is the base level for arbitrary noise such as a vacuum or normal TV audio. The upper 70’s is where people become annoyed. The fan in this reporter’s office is right around 59-60 dB and that is a nice background noise. Typing with the meter on the desk inches away from the keyboard maxed out at 70 but was averaging 64-66 dB. That means 83 dB, while a little over twice as loud a vacuum, is not as big of a jump as one would expect for such a large vehicle.

Trains are moving faster than you think. Even the accidental demonstration train looked to be barely moving and it was moving between 5-10 mph. At that speed, there were zero issues holding a conversation 15 feet from the train. The same cannot be said about a 30-foot box truck that drove by earlier. Trains are sneaky quiet until they blow their horn.

Micki Mair, CP Rail Police Officer spoke about the theme for the day to reinforce the message.

“When you are near tracks always expect to train. Don’t play on the tracks don’t cross the tracks unless it’s an actual crossing. We just look for the community to be safe and be aware of their surroundings when they’re on the tracks,” she said.

The 30-minute interaction with the representatives from CP Rail was quite the eye-opening experience for those in attendance. Mayor Mary Fasbender was in attendance and asking all the right questions to answer citizens concerns expressed at a recent city council meeting.

“It’s about education, this has been a great learning experience,” said Mayor Fasbender. “Sometimes you don’t know what you don’t know, and we learned a lot here.”

Fasbender was referring to a particular exchange that happened around the use of the train horns, a large concern from citizens.

“The primary concern from constituents is that the train horns have been louder, used more frequently and for much longer in the last month or so,” added Mayor Fasbender. “Now we have a good explanation as to why, it is the maintenance of the tracks and the mandated use of horns.”

An important piece of information for the three rail crossings in Hastings is, the only crossing designated as a quiet crossing is 2nd Street. That designation is still relatively new with the needed gates installed in 2008- 2009. 10th Street and 18th Street are normal crossings.

At normal crossings, there are rules related to the need for a horn to be blown. Quiet crossings only require the use of the train’s bell. The problem that we are having currently, is the extra uses of the horn while the tracks are undergoing maintenance.

The Federal operations rules dictate that anytime there is a person close to the tracks, the horn must be used within a certain distance of the person and until the train engine is past the person. If not used, the engineer can be written up and ultimately lose their job. This also includes any rail workers experienced in being around moving trains. That means, if a track is being worked on, anytime a train goes by, they have to sound their horn until they pass the worker.

This brings up a question that needs to be asked. Does that include any paved path that an engineer deems is too close to a track? The group on hand could not answer that question without seeing an example of the path. It certainly would mean any sidewalks or paths that cross a track such as the crossing at 18th street. The importance of this could be an explanation of why the horns in the vicinity of the mill have increased in frequency. Workers near the tracks, other people crossing the tracks or riding on paths close to the tracks. The good news is the maintenance project should be over by the end of October.

Other pieces of safety week involve topics like photographers using train tracks as a spot for Senior pictures or other pictures.

“It is illegal. It’s trespassing and it’s very dangerous. Trains do not always run on schedules. They can be in any area at any time. So even if it’s a track that’s not frequently used setting up for senior pitchers, there could be a train coming through that day since there is no schedule, so we don’t like to see the senior pictures, family pictures, any type of pictures on or near railroad tracks,” said Mair.

As mentioned above, trains are oddly quiet compared to other things, so a train at 45 mph will be on top of the picture spot quickly and without much warning. Remember, an accident with a train happens every three hours, the best way to not be part of that statistic is to not put yourself in a compromising position. 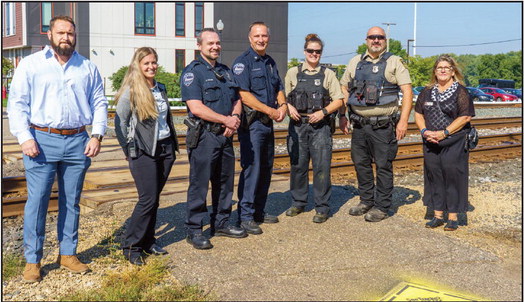