Talking to any high school athlete after the game is tough, especially with a loss, and this loss was no different. The Raider boys were being pretty hard on themselves after this one.

After the shock of the loss numbed a little, receiver John Bezdicek gave some insight into his touchdown.

“We had a new play inserted this week and that was what we scored on. I just went up and got the ball. I feel the play worked really well,” said Bezdicek.

This year, playing Simley was a little different for Bezdicek, as he played with many of their position guys this past summer in a 7on7, fun league.

“I know most of those guys, so it was fun. They are super friendly,” added Bezdicek.

That does not take away the sting of the loss.

Offensively, Hastings ran the ball 25 times for 132 yards. Millner had the long run of 68 yards and a total of 70 yards on five carries plus one touchdown. Peyton Burow had 40 yards on 16 carries. Millner completed 34 percent of his passes, going 10for29. Bezdicek led receivers with four catches for 120 yards and one touchdown. Rico Cooper had three catches for 35 yards, and John Cloutier caught two for 16.

The Raider defense gave up 244 yards rushing on 37 carries for a 6.59 yards per carry average while allowing three touchdowns on the ground. They allowed 128 yards in the air on Simley’s 7for18 passing attack. They allowed one passing touchdown and intercepted Simley once.

Up next for Hastings is a very tough St. Thomas Academy squad on Friday, Sep. 23 at 7 p.m. for the Raiders’ Parent’s Night. STA has outscored their first three opponents 1277. That one score allowed was in their first game against South St. Paul. Since then, they have shut out Two Rivers and Hill-Murray.

St. Thomas is averaging 219.3 yards per game on the ground and 8.5 yards per attempt. Rushing is their bread and butter according to the stats, as they have only passed 17 times in three games, completing 10 passes for a total of 96 yards. Defensively, they have allowed 121.5 yards in the air for their three games and only 25 yards on the ground. Hastings will have their work cut out for them. 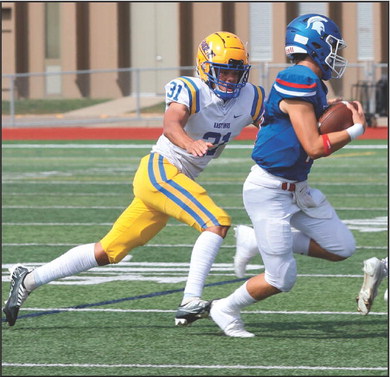 Isaiah McCabe chases down the Simley running back in hopes to slow him down for a gang tackle. Simley had a trio of rushers that were very difficult to stop solo. Photo by Sarah Wasvick