The COVID pandemic affected every person, organization and business. Through that time, Allina Health embarked on a journey called a “Whole Way Better,” and patients of all its local healthcare facilities, which includes the River Falls Area Hospital, will benefit from the changes.

Helen Strike is president of United Hospital – Hastings Regina Campus and the River Falls Area Hospital. She and Kristy Barse, who serves on the community board for Regina visited the Prescott Area Chamber of Commerce meeting on Wednesday, Sept. 7 to update the community on the new vision for local healthcare, and the positive changes patients will see. “The hospital has been going through a significant number of changes over the last few years,” said Barse. “The most recent one was the merger with United. Ultimately, it’s one hospital with two campuses. If you were to come to Regina for services, you will be able to utilize the United Hospital services without an additional transfer fee. We’re trying to get out and explain the benefits of what this one hospital, two campuses looks like and how it can benefit the Prescott community.”

Strike will mark her 10th anniversary with Allina Health next year and has worked in healthcare in Minnesota for 20 years. She said that much has changed in the healthcare market, and that has led to some difficult decisions that had to be made. Allina closed its Prescott clinic in 2019 and a local Courage Kenny Rehabilitation Institute office in 2020.

“COVID got in the way of that,” she said. “It was hard to get out and talk to everybody about what some of the plans were and reassure folks. I appreciate the chance today to come and talk to you about some of the things we’ve been working on at Regina.”

Regina Hospital’s roots date back to 1853. The names and ownership affiliations have changed, and it was acquired by Allina in 2014.

Having the Allina system for support was critical during the COVID pandemic.

“During COVID, we had crazy experiences individually and as families, and we did as hospital. I was grateful to be part of a big system, to have access to the supply chain, the people, the experience, the medical knowledge,” she said. “We’ve been able to actually enhance Regina Hospital tremendously over the last couple years.”

Technology has allowed for specialist consultations in special and intensive care departments.

“We have 24/7 intensivist consults available. That wasn’t there before COVID. We were able to keep much sicker patients,” Strike said. “Over 2.5 years, we moved almost 4,000 patients from one hospital to another to receive intensive COVID care. We’re really proud of the role that we played through that.”

She said Allina was able to include River Falls Area Hospital in that program, meaning patients could be treated closer to home, rather than having to be transferred to Eau Claire or La Crosse.

The alignment with United was in the planning stages through that time.

“We were able to start thinking about a ‘Whole Way Better’ and moving forward in the future,” Stike said.

The twocampus concept with Regina and United means better care and access to skilled providers.

“We’re providing seamless connected care,” she said. “We’re hoping we really have the secret sauce to being able to have the things that people need to get the care that they need and wish for.”

The two hospitals now operate under one hospital license, which eliminates red tape, even though the hospitals were in the same health system.

“It really has some specific benefits, because when you’re a hospital, there’s a lot of red tape when you move patients from one hospital to another. We’re able to remove some of those barriers,” said Strike. “It allows our team members and patients to benefit from closely connected programs and services that maybe had a little red tape in them before. We were able to break down those barriers. It’s a big deal to do this.”

Patients who move for services between Regina and United will see one bill, and caregivers have electronic access to medical records at both locations.

She joked that the hardest part has been the new longer name.

“It’s been hard because if “People were choosing to go into the Cities for their care and we were having trouble getting providers and specialists to come down to Regina. Patients and ambulances were choosing to drive by us. We wanted to make things easier to strengthen the care in our community. Already in Hastings, patients were choosing United Hospital over any other hospital in our area. Those of you who were looking for care were often going to United. So why not stop competing against that? Why not join that partnership and make that easier. This allows us to really share patients, rather United, and that United was delivering more babies in a day than Hastings was in a week.

“We had to make a really tough decision about that,” she said. “I think you’re hearing now across the country, with workforce shortages at hospitals, I just read of 17 birth centers that have closed because of workforce issues and volume.”

The whole move to the onehospital, twocampus concept was to solidify local care.

“We are completely committed to care in our communities,” she said. 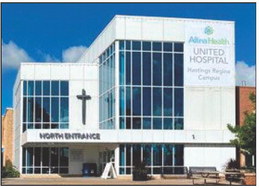 A banner is emblazoned with the new name of the hospital in Hastings – United Hospital – Hastings Regina Campus. Photo courtesy of Allina Health