Construction of the LeDuc Mansion in Hastings began in 1862 and was completed in 1866. The residence was built for Civil War Brevet Brigadier General William LeDuc, Mary Bronson LeDuc and their four children. It was designed by Andrew Jackson Downing and the property features a carriage house and icehouse along with the residence at 1629 Vermillion St. in Hastings.

The home stayed in the family until 1940 when Carroll Sim_ mons purchased the home from the grandchildren for use as an antique store. In 1958, Simmons donated the home, outbuildings and four acres of property to the Minnesota Historical Society, with the caveat that he was able to continue using it for his store until he retired, which was not until 1986. From 1986 until 2003, the mansion sat empty. Eventually, over $1.2 million was invested into the property to bring it up to code. On May 22, 2005, the LeDuc mansion officially opened for tours to the public. The mansion is owned by the City of Hastings and the Dakota County Historical Society. The DCHS operates and manages the prop_ erty.

Each year, the DCHS hosts a two_day event with mini recre_ ations of civil war activities on the LeDuc property. The event is always the first weekend after Labor Day, and it runs from 10 a.m. to 5 p.m. both days. Typically, they see around 500 visitors over the weekend,, but there is always room for more.

“It is a great, fun, family_friendly event,” explained site man_ ager Mariah Ring. “We typically get enough donations from our sponsors that we are able to allow free admission to all children, which is really awesome. That makes it a really great event to bring your family to because you don’t have to pay too much to get in, and there are always things going on. We have cannon fire. We have drill demonstrations, medical demonstrations, you can see people cooking, we’ve got the chickens back, so you get to watch the chickens and it’s just a great weekend to really just sort of immerse yourself in Civil War history.”

Part of that history revolves around LeDuc being a Civil War quartermaster as explained by local history expert and former teacher, Spencer Johnson.

“While this house is being built during the earliest part of the civil war throughout the Civil War, it was often a quartermaster officers’ job is to make sure their soldiers have supplies, food equipment, medicine, and the supply lines, railroads, wagon roads, steamboats, etc. It is the quartermaster who makes sure that the army is well supplied,” explained Johnson.

The groups have been doing reenactments at the LeDuc site for several years. It is rare that a Civil War era building is still standing and available to host events such as this. Johnson gave a lay of the land.

“There are several groups here,” began Johnson. “That group represents the First Minnesota Company. They represent the first volunteers. And in Hastings there was a company with 1,000 men that was the first one in Minnesota to go. The Third Minnesota is on the other side of the house. That was a battery from Red Wing, that is another living history group. There are some lovely civil_ ians called the Living History Society that are dressed both as lower class and upper_class ladies and doing different roles. I’m doing a lot of cooking, and I have a great team of helpers. Of course, we are eating better than the real soldiers. We have a ham roasting for tonight. We’re going to boil corn tonight, there’s lo_ cally made sausages. This morning we had potatoes from the gar_ den, onions from the garden. A hash, bacon and brats from Duff’s Meats. There’s a lot of participation. We are doing cooking demonstrations. She’s making fresh bread in Dutch ovens and the fire and dashing butter over there. There are several speakers, somebody selling historic books, history books behind the shed, there’s other demonstrations, display of historic weapons in the shed. There’s lots of stuff going on today.”

The re_enactors have a great time sharing their passion with visitors. It is definitely something you should put on the calendar to attend for 2023 if you’ve never been there before. The dates of the event will be September 9 and 10 next year. Other future events to look forward to this year are: The tours focus on the history of LeDuc’s spirituality and is a perfect fit for the upcoming Hal_ loween holiday. Dates for this event are Oct. 15 and 16 Enjoy a Christmas themed tea party on Dec 3 and 10.

The LeDuc Historical Site is always looking for volunteers, if you are interested in volunteering, visit www.dakotahistory.org. 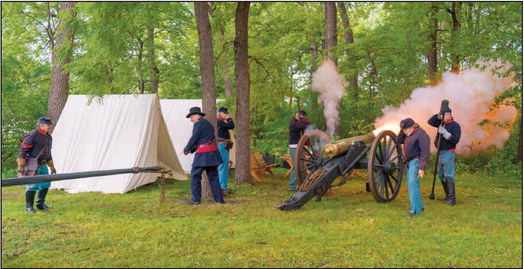 One of the more popular reenactments is the firing of the cannon. The sound and the flames that extend out of the cannon is an incredible sight to see firsthand. Photo by Bruce Karnick 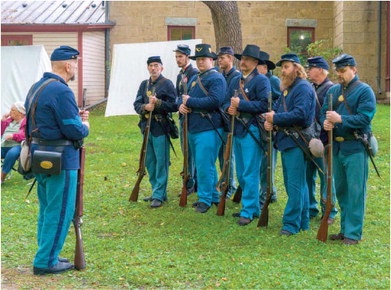 Living history members gathered to show onlookers how the First Minnesota Company drilled during the Civil War. The First MN Co. was an infantry unit based out of Hastings. Photo by Bruce Karnick 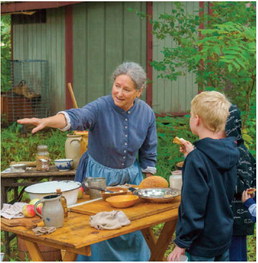 One of the demonstration camps shows off cooking done during the Civil War. Here, Pat Bauer explains how they made bread at the camps during battle. Photo by Bruce Karnick