Area business leaders met with the Hwy. 61 project team to discuss options and concerns for the reconstruction of Hwy. 61 in Hastings from 4th Street to the south end of town. Photo by Bruce Karnick
News
Hastings businesses, residents give feedback on Hwy. 61 rebuild plans

The Minnesota Department of Transportation is nearing the end of the months’ long data collection phase for the proposed Hwy. 61 update and upgrade project that could begin construction in 2027 through Hastings. MnDOT began collecting information at the end of January 2022 and expects to wrap up evaluating the options and receiving public feedback by the middle of November.

The firm and engineers involved have acknowledged the mistakes that were made on the Hwy. 316 project, and many businesses in the community were quick to point out that the concerns they had with the design of that roadway are most of the bad parts that came to fruition in the final construction phase. The design team for the Hwy. 61 reconstruction is working diligently with the community to make sure as many voices are heard as possible.

There have been numerous public meetings around the needs of the community and how to incorporate those needs along with the City of Hastings Comprehensive Plan and the People Movement Plan. Two plans that the city has already invested heavily in creating.

The four districts have distinct differences in them all within a few miles of roadway and each has their own set of difficulties to work with: Residential being personal homes or smaller apartment complexes, businesses being smaller businesses with normal storefronts, commercial being larger businesses with larger footprints that may or may not include production on site.

The Downtown District is largely residential with the transition from business to residential starting around the 5th and 6th Street intersections depending on what side of the road you are on.

The Midtown District has a similar mix of residential, transitioning back to business, with the added vehicular stressor of the Hwy. 55 intersection at Todd Field, and the new high density residential apartments behind the School House Square.

The Southtown District has a mix of all three, commercial, business and residential, and serves as the highvolume connector of Hastings to other communities to the south via Hwy. 316 or Hwy. 61.

At the meeting with businesses held Aug. 24 at Hastings Golf Club, many concerns were discussed, such as closing off entrances to parking lots on Hwy. 61 or closing off the median preventing left turns across 61. Examination of the released proposed idea reveals that those concerns were mostly ignored. The proposed ideas for the corridor include seven of the intersections become right in, right out only. Those streets would be 5th, 7th, 8th, 12th, 14th, 19th and 22nd with there being a possibility of also closing 10th street by Todd Field, along with possibly making 23rd a rightturn only intersection.

In the Downtown district, closing the intersections at 5th and 7th Streets does not sound awful for pedestrians or automotive traffic. There are still simple ways to navigate to businesses by circling the block, but that is not ideal for the businesses. For residents, it will be an easy adjustment. Overall, the plan for this particular district looks simple enough. The other three districts are a bit more complicated.

The other concern raised was closing off many of the driveways on Hwy. 61. Twelve driveway closures are part of the proposed plans, seven of which are between 12th and 14th Streets in Midtown.

On the Perkins Restaurant side of the road, the driveway on Hwy. 61 to the front side of Perkins would be closed. The back side would remain open. The other two driveways between Perkins and the building that hosts the dry cleaner and tailor would be closed, as would the driveway on the other side of the building, which is the only driveway you could make a left turn into heading north on Hwy. 61.

The proposed changes, if implemented, would mean the only way to access Perkins or any of the other dozen businesses in that three blocks from the south would be to turn left at 15th Street and use Eddy Street or turn left at Hwy. 55 and use the back roads from Roadside Park, which some fear is confusing to outoftown visitors.

For motorists travelling southbound, it will be slightly easier. The choices are to turn left at 10th Street or 15th Street and use Sibley Street to access the businesses that have driveways there, but that isolates Jersey Mikes, Dunkin’, Miracle Ear and DQ since they do not have Sibley Street driveways.

There have been some alternative discussions for the Midtown district. One is making the driveway that leads into the Walgreens parking lot across from Hwy. 55 be an actual through street and closing 10th Street off completely.

Another issue is fixing the intersection of Hwy. 55 and Hwy. 61. The righthand turn by Todd Field to go on to 55 is severely undersized and the ground under the roadway is beginning to show signs of wear. At the heart of the issue is space and at the heart of the space issue is the historic wall of Todd Field. The wall is old, the materials behind the wall, older and the design of the original wall is outdated. The wall as it sits leans significantly from the base toward Hwy. 61.

The best course of action being discussed is to replace the wall with a new wall that stands straight up. Engineers believe they would gain an additional 810 feet of roadway by simply making a wall that is straight up and down versus slanted. However, there are multiple players that would need to be involved with that decision: the school, city, state and potentially historic preservation people. Regarding football games and kicking, there would be a much better net system in place to prevent footballs from being kicked onto 61.

Moving to the Vermillion River district, 18th Street is currently set up where there is a lot of space to navigate the intersection because of the number of semis that use the intersection for the mill and because the two 18th Streets, East and West, do not line up. The streets being not lined up poses issues for turns and crossing in all directions, and the intersection needs to change to make it safer for all involved. There are a few proposed ideas for that, one being moving 18th Street East to align it with 18th Street West. The other option is a roundabout. The interesting piece of this district is there are proposals for potentially three roundabouts: one at 18th, one at County Road 47 and one at 23rd. Another major change being proposed is closing the left turn at the edge of the bridge to go Vermillion Falls Park. This has major implications for both Cemstone and the DOT maintenance facility and the heavy trucks that turns there, as well as visitors to Vermillion Falls Park. The closing of the left turn lane involves a significant change down the road toward Hwy. 316.

The additional proposed change is to add a road directly across from 23rd Street West. The proposal is to add a 23rd Street East. The problem with that is the proposal runs right through the parking lot for Gahnz Furniture. Along with adding that street, there is a proposal to add a side street that runs north and south behind all the businesses and becomes the new access to business lots since they want to close all of the driveways on Hwy. 61 between 23rd and 21st.

For the Southtown district, there are a lot less changes proposed, the biggest being the Hwy. 316 and Hwy. 61 intersection. There are multiple options proposed for that, including a roundabout, a traffic signal, returning the intersection to the way it was years ago, a continuous green lane for southbound Hwy. 61 with a light to control the other lanes, and other ideas.

The amount of data and feedback for the engineers must be massive given the scope of a project like this. It is roughly a 2.5 mile stretch of a major road not only to Hastings, but to the region as a whole. Over 33,000 vehicles travel on Highway 61 each day, and that number is only going to grow over the next few decades. 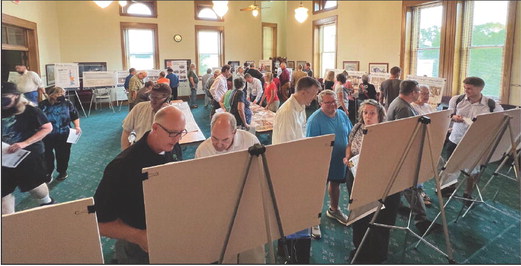 Later in the day on Aug. 24, the Hwy. 61 project team held an open house at Hastings City Hall to discuss some of the ideas already created to make improvements to the Hwy. 61 corridor. Photo by Bruce Karnick

One proposal for the Vermillion River District is to create a new 23rd Street East and have access roads behind the businesses to both the parking lots as well as Vermillion Falls Park. A traffic light would be installed at 23rd Street. Graphic courtesy of the MN Department of Transportation