Steve and Sylvia Bauer began their Pioneer Village in 1987 when Steve was helping a friend tear down a home. The home was discovered to be a log house and he decided to save it. Thus, the Little Log House Pioneer Village was born. One year later, the Bauers played host to a neighborhood threshing event. During that time, the neighbors could tour the Little Log House, show off their equipment, watch threshing and plowing demos and enjoy a meal. That has grown into the Antique Power Show that the area loves today. This year’s event was held July 2931.

The threeday antique power show draws thousands of people to the more than 40acre property that sits about seven miles south of Hastings. Covering the last full weekend in July the event only missed one year due to COVID, so this marks the 31st annual event instead of the 32nd.

“Attendance since the COVID closure has been really good,” explained Sylvia. “We've had a wonderful weekend because of the weather. Last year it was quite warm. So, attendance was about normal, but not higher than normal. This year, attendance has definitely been higher. We don't have a total yet but definitely higher than normal, and people with the nicer weather they come. They stay longer. They try a lot of different food places, and they just stay longer and enjoy the whole show.”

What is new this year for folks? “Well, the big flag, that flag is new. I am not sure on the dimensions, but it was a light post that was taken down from the corner of 494 and 694. It's 140 feet tall. I believe the flag is 30 by 60,” Sylvia said with a smile. “We did a nice little inauguration down there of the flag the first day and had the National Anthem sung. And it was very it was a real nice presentation of the American flag.”

She also joked that her husband Steve is quite the windmill collector, so folks may or may not notice some addiLittle See LITTLE LOG HOUSE, Page 7

The newest addition to the Little Log House Pioneer Village is the 140-foot tall flagpole which came from the Twin Cities. The flag is roughly 30 feet x 60 feet in size, and they had a special ceremony at the start of this years show for the raising of the flag. Photo by Bruce Karnick.

An old west reenactment group performed wild west style shootouts at different locations on the grounds for guests to witness. It was a chaotic and interesting sight to see. Photo by Bruce Karnick

The Hall House is one of a plethora of old houses that were moved to the Bauer’s property for preservation. The Hall House was designed and built by Dr. Orrin Hall in 1884 in Zumbrota. Before it was moved to the Pioneer Village, it was the only house in Zumbrota to be listed on the National Historic Register. Photo by Bruce Karnick

This beautiful view of the waterwheel is on the back side of the Grist Mill from Sylvia’s Garden. It’s quite calming to sit and observe the water pour over the wheel. Photo by Bruce Karnick

The old St. Boniface Church, from the now St. Elizabeth Ann Seaton School property, was moved to the Pioneer Village starting in 1995. The church was rebuilt brick by brick and is a two-thirds sized rebuild of the original using the original stained glass and bricks. Photo by Bruce Karnick tional windmills around the grounds. What do they plan on adding next year?

The details of the new flagpole came in after the interview. The pole was put up on June 17 by Vic’s Crane and Heavy Haul and the flag was raised on June 20. The pole was originally a light pole at the intersections of 694, 94 & 494 in Maple Grove, MN. The pole was taken down in five, 30’ sections by an electrical contractor and was headed for a scrapyard. Steve and Sylvia’s employees put the pole back together.

The pole is 140’ and the flag is 30’ x 60.’ In order to raise the flag from top to bottom, they used a 1/4” Americanmade stainless steel cable that is 300’ feet long, which is operated by a winch inside of the pole. On top of the pole, there’s a mechanism called a truck, in which the cable goes up, around, over and down to the base of the pole. This allows the movement of the flag. The truck was designed and built by Brett Huneke, a friend of Steve. At night, the flag is lit up with 750,000 lumens.

Some of the bigger draws for folks are Sylvia’s Garden, a beautifully landscaped area filled with color and water features along with a gorgeous view of the Grist Mill and the waterwheel that powers it. Another popular one is the twothirds scaled reconstruction of the St. Boniface Church that was done using supplies from the original church that sat at the corner of Sixth Street East and Ramsey St. They also preserved the original bell tower from the church and have it on display next to the church. The rafters from the church were used to build a new wedding ceremony space on site.

Other popular spots are Porky’s Diner that was moved to the property in the last few years, the old Vermillion General Store, all the old buildings around the grounds, the area setup for car cruiseins and of course, the machinery areas.

Seeing the sights properly could very well take a person two days to get through it all and take in the wonderful demonstrations they host throughout the weekend. There were Old West reenactments, church services, quilting demonstrations, and many more. There were local artisans selling their crafts, food available from a variety of vendors, bands, a tractor pull, parades, simply too much to list.

The fully functional sawmill gave demonstrations to onlookers as needed throughout the day to show people how siding was made from wood. Photo by Bruce Karnick 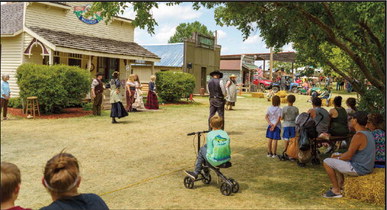 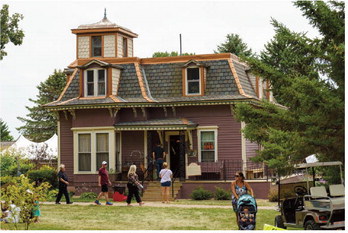 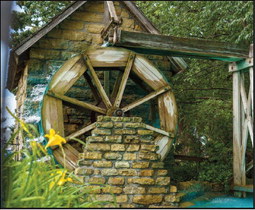 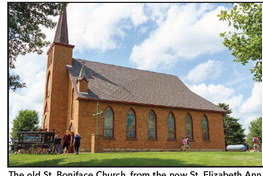 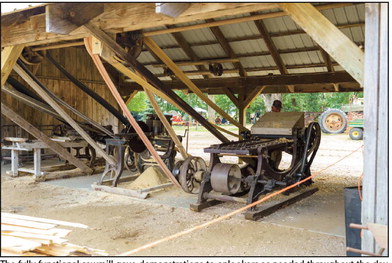