Sports
There’s No Crying in Baseball!

Hastings Softball Coach is on the Small Screen!

It’s hard to find someone who hasn’t seen the classic 1992 baseball film “A League of Their Own” about the 1940s’AllAmerican Girls Professional Baseball League (AAGPBL) where we all learned, “There’s no crying in baseball!”

The beloved film is getting a reboot in the form of a TV series starring Abbi Jacobson, Chante Adams, D’Arcy Carden, Gbemisola Ikumelo, Roberta Colindrez, and more. If you look closely in the background, you might see LewistonAltura alumna and Hastings High School Varsity Softball Coach Jennifer Thesing as an extra in the show!

The opportunity to audition for the show came in January 2020 when KARE11 News posted that they were looking for people to try out, and Jenn responded to the ad. They asked softball questions and body dimension questions. She submitted the application, and she got an email a couple days later with an invitation to come and do a tryout.

A little hesitant about the short schedule and the expense of the trip, Jenn posted a question to the hive mind on Facebook, “If you got an invite to audition for the “A League of Their Own” pilot in nine days in Encino, CA, would you do it? Or just let it slip?” She received an overwhelming response of, “DO IT!” From her friends. A friend offered her a freebie companion plane ticket, and they were off to California!

There were about 80 girls at the ballpark. She felt like she was in the top third of the girls compared to skills. She said there were some really talented ball players who could throw 6070 mph across the field. They have women’s baseball leagues in California, so a lot of the girls were baseball players. After the tryout day, the producers said, “OK, thank you, we’ll be in touch,” and Jenn flew home.

A couple of days later, she got another email asking to come back to be in the show. She needed to send her body measurements ahead to get fitted for a costume. She was there for two days, and they asked her to stay for the third to finish shooting. Depending on what the final cuts look like, Jenn is probably in the background in the tryout scenes. She’s wearing a gold and blue satin uniform, and she said, “I definitely stick out.” As part of the production process, all of the costumes, props, hair, and makeup are photographed and kept together for each actor for the duration of the show. Jenn is done shooting for now, but there’s potential for her to go back as possibly an opposing player if the storyline requires it.

While shooting, the extras and cast had the opportunity to meet and greet MayBelle Blair and Shirley Burkovich who were players in the original AAGPBL. Shirley was in the original movie in the Hall of Fame scene. Blair and Burkovich gave the women tips on how to use the gloves in the movie. The producers had replica gloves made to be historically accurate, and they look and feel VERY different from contemporary baseball and softball gloves because they don’t have a big pocket like contemporary gloves do. Many of the players had trouble fielding because it almost felt like they were barehanding the ball without a pocket in the glove. Blair and Burkovich advised they needed to put as many fingers as they could in the pinky hole and spread the other fingers out. That’s what forms the pocket. The index and middle fingers are not necessarily in the spots where they’re supposed to be.

Shirley talked about one of the women on her team who was underage, and her mom traveled with her the whole time. The family “said” she was 18 even though she wasn’t. The girl’s baseball income was the primary income for her family at the time.

While Jenn does not get very much screen time as an extra, there’s a scene where she’s in the background of where one player gets excited about another player being able to speak Spanish, and the other one is trying to hush her, so they aren’t found out. Keep an eye in the background during the tryout scenes.

The series will premiere on August 12, 2022 on Amazon Prime Video.

Jenn Thesing with Shirley Burkovich, one of the original players in the All-American Girls Professional Baseball League.

Jenn Thesing with MayBelle Blair who was one of the original players in the movie A League of Their Own. Photos submitted 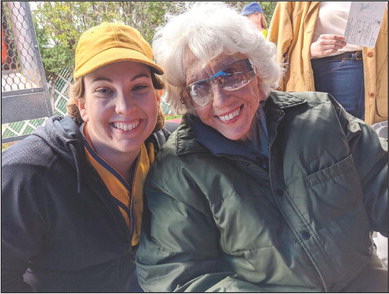