New life is being breathed into a historic Hastings home.

Plans for renovation of the Thorwood Estate, 315 Pine St., received the unanimous blessing of the Hastings Heritage Preservation Committee at its meeting Tuesday, July 19.

The building has been vacant since a fire nearly demolished the structure in 2017. The owner of the 10,000squarefoot building announced plans to renovate the building in 2000.

The Thorsen family purchased the French Second Empire mansion around 1977 and operated it as a bed and breakfast for more than 30 years. It was known as Thorwood Rentals & Retreats at the time of the fire.

Owners Dick and Pam Thorsen, along with their daughter and two dogs, were able to evacuate the building safely on Dec. 14. At 2:30 a.m., firefighters were called to the scene for an activated alarm. However, the homeowner had already put out the fire before their arrival. The fire had ignited a wall covering when a boiler unit malfunctioned. A thermal imaging camera confirmed the fire was extinguished. Then, around 5:30 a.m. that day, there was a second fire call. About onethird of the roof had already burned when firefighters arrived. The cause of the fire was undetermined.

The building has sat vacant since. Property owner Pavel Zakharov had planned to rehabilitate the structure in phases with a total removal of the third floor which was deemed unsalvageable.

According to the Historic Preservation Committee information, Zakharov planned to cap the second floor and put on a flat rubber roof. In another stage of development, he intended to build a new third floor. As two feet of debris was removed, “The applicant found that the secondfloor walls extended past the third floor and were integrated into the mansard roof.”

Because of that, Zakharov plans state: “The applicant is proposing to construct an enclosure over the second story roof improvements rather than another solarium to be more usable and tie in better with the structure. The enclosure would have scalloped wood siding like the rest of the house, but without a mansard roof. The roof would be a medium pitched metal roof. The existing chimney would be maintained. The applicant had planned for a large western picture window, but staff suggested a grouping of windows to be more consistent with the era of the structure. The plan shows a group of two double hung windows flanking a fixed window.

“The applicant is also proposing a rooftop deck on the third floor, which is concealed by the mansard parapet walls.”

HPC staff found that the project “will allow the preservation of some small portions of the thirdfloor wall sections and assure reconstruction is consistent with the original design.”

A historic photo of the Thorwood Estate, 315 Pine Street on the left. At right, a photo of the estate as it sits now, vacant since a 2017 fire nearly destroyed the structure. Photos courtesy of the Hastings Historic Preservation Committee 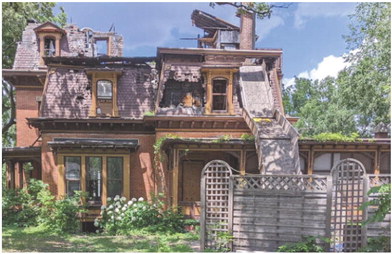 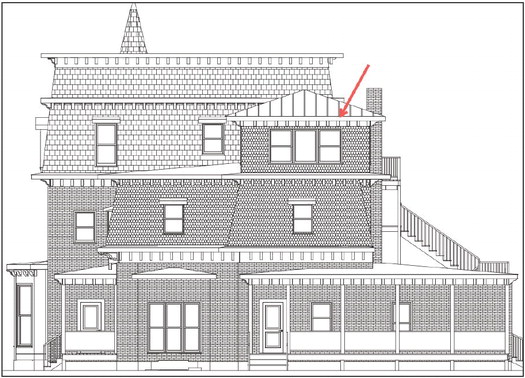