News
Hawks fall to Bears to finish third in the CCVL

Life in the Classic Cannon Valley League is difficult. With the highquality teams that have a rich baseball history, the CCVL is one of the most difficult and competitive leagues in the state. Hastings, Cannon Falls, Lake City and Red Wing make up the Class C group. Hampton, Rochester, Miesville, Dundas, and Northfield make up the Class B group. And now, the playoffs are set for Class C.

Had the Aces defeated the Bears, the game would have been for nothing but bragging rights. Red Wing’s twitter even apologized to the Hawks for their failure to assist the team that had been in the number two spot all year.

With the 5C preliminary tournament bye on the line, Hastings started this year’s ace Jordan Jeske on the mound to take on the crafty Keith Meyers from the Bears. Meyers kept the Hawks befuddled as he usually does in his five innings to earn the win. Meyers was relieved by Nick Drinken to start the sixth and he earned the long relief save. Meyers allowed only three hits with one walk on seven strikeouts. Drinken did not allow a base runner for 12 straight Hawks hitters which included six strikeouts of his own.

The first two Bears runs came in the bottom of the third. Veteran Rich Burr led off with a hardhit ground ball to Ben Bundschu at third. Bundschu misplayed the ball and Burr reached on an error. A single gave Cannon runners at first and second with no outs. Hastings logged two outs before Brock Peterson crushed a double to the gap in right center scoring two. Burr, who has over 30 years of playing time in the CCVL, singled in the seventh and was replaced by his son Jayden who scored on a Bears single.

“Hats off to them and their pitching. They played good defense all night,” said Hawks Manager Shawn Matson after the game.

“We knew what we were going to get from them,” Matson added. “Quality pitching and good defense. They did a great job quieting our bats.”

Jeske pitched well the entire night allowing three runs – two earned on only six hits while striking out six and walking one. Will Lavin relieved Jeske for the final inning and a third and he logged two strikeouts.

Offensively, the Hawks could not muster up much for offense only logging three hits. Jackson Schaffer, Jackson Tessman and Blake Warner were responsible for the Hawks three hits.

Hastings fell 30 in Cannon Falls and that dropped them to the third spot in the standings. The loss also meant that they would now be participating in the eight team preliminary tournament for Region 5C with the first game against Winona Wednesday night at 7:30.

After the loss to Cannon Falls, Matson was focused on dealing the things he can control, “We just have to come out and have better at bats no matter who we who we play. I thought we did a pretty decent job tonight of, making Keith work a little bit. We did a great job of putting together some great at bats against him and drove his pitch count up which you really need to do against a guy like Keith.”

The number two seeded Hastings will face off against the Winona Chiefs in the first round of the tournament Wednesday Night at Veterans Park. A win there and they will travel to Red Wing Saturday, a loss and they go to Cannon Falls, both games are scheduled at 4:00 on Saturday.

It will take two wins from the start to make the Region 5C tournament as either the six or seven seed. If Hastings drops the first game, they will need to win the next two to earn the eighth seed for the Tournament. Two losses and the season is over.

Jordan Jeske pitched a solid six and two-thirds innings for Hastings against the Cannon Falls Bears. Unfortunately, Jeske did not get the run support needed to earn the win and the preliminary tournament bye.

Rookie Jackson Tessman, pictured here getting assistance from base coach Nick Horsch, has been a welcome addition to the Hawks roster this season putting in solid performances at the plate all year, including being one of three to log a hit against Cannon Falls. Tessman’s defensive capabilities have been superb in the infield for Hastings, consistently making difficult plays look routine. 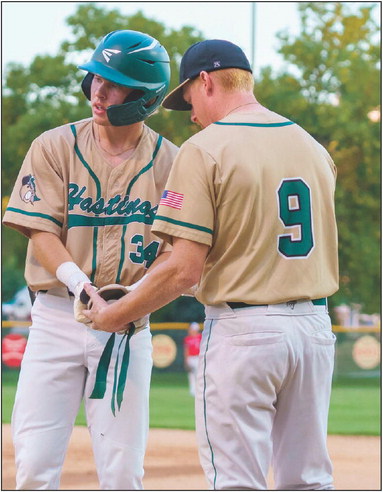 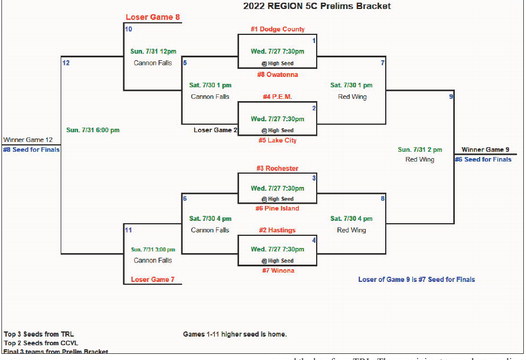