“The boys played great! We had a blast and they brought energy to Vets. We went 1412 on the season and it was a really fun year,” said Seleski. “We had eight sophomores, four juniors and one senior, Joe Schuster. Schuster set a great example for our younger boys. We learned a lot about being a team and got some great experience to help the Varsity team in 2023.”

The tournament held in Hastings at Veterans Park showcased some of the best talent in the region for baseball and included many players from teams that went to the MSHSL state tournament, including Farmington and Cottage Grove. The Saturday weather messed with the schedule a little bit, but the teams did a great job adjusting and working together to complete the tournament in a timely manner.

Here is a recap of the Hastings games.

The Raiders jumped out 10 in the first on an RBI single from Evan Nelson, scoring Jack Seleski. Boys added another run in the fifth on a Seleski single scoring Blake Vandehoef. Lakeville put up 1 in the sixth making cutting the lead in half, but Raider answered in the bottom of the sixth as Jarod Neuville stole home on a ball in the dirt. Aaron Vandehoef pitched a Complete Game five hitter – great effort on the mound. Seleski and Nelson both 23 with one RBI.

The Raiders fell behind 20 after the first inning but answered with two runs in the fourth to tie it up on a Brody Anderson base hit scoring Mitch Iliff and Jack Seleski. Farmington scored in the sixth to take a 32 lead. The Raiders answered in the top of the seventh. Connor Zgoda led off with a pinch hit double and Seleski tied the game 33 with a two out base hit scoring Zgoda. The game went to extra innings with the Raiders taking the lead 43 on a Johnny Teigland leadoff double and a Aaron Vandehoef sacrifce fly scoring Teigland. Farmington came back to score two in the bottom of the eight for the heartbreaking loss. Nelson threw five innings giving up two runs with a great effort on the mound. Seleski 24 with one RBI, Mitch Iliff 24 as well.

Friday (Elimination Bracket): #4 Hastings 9 #3 St. Paul Park 4 The Raiders were in control the entire game, jumping out 30 in the first inning on a Mark DeNoyer double scoring Eddie Peine, Joe Schuster and Mitch Iliff. Held on for a 94 win behind five gutty innings from Eddie Peine on the mound. Mitch Iliff went 23 at the plate.

Saturday (Elimination Bracket): #4 Hastings 13 #2 Eagan 10 The Raiders scored four in the first inning on a Connor Zgoda double scoring Joe Schuster, Jack Seleski and Eddie Peine and they never looked back as they jumped out to a 134 lead after five innings. Eagan came back with rallies in the sixth and seventh, but Hastings held on 1310. Seleski 34 with three RBI, Peine 24 with one RBI, Zgoda 44. Mark DeNoyer pitched five great innings on the mound.

The Raiders struck first with a Joe Schuster single scoring Sawyer Tjomsland in the third inning to give the boys a 10 lead. Farmington answered with three runs in the bottom of the third and three more in the fourth. Hastings fought back with two runs in the fifth as Aaron Vandehoef and Brody Anderson scored on a Jack Seleski base hit making the score 63. Tired arms caught up with the boys as Farmington put seven runs over the next two innings earning a bid to the Legion State tournament as they ended the Raiders season. John Teigland gave Hastings four strong innings on the mound. Joe Schuster 23, Jack Seleski 24.

A special thanks to Coach Seleski for providing the stats and recaps of the games and to all the volunteers from HYAA and the Hastings Hawks who helped put on a great tournament for these kids.

Catchers are always jaw-jacking at the other team, trying to get into the batter’s heads. Here, Connor Zgoda laughs at something the catcher said to him before his at bat. Photo by Bruce Karnick

Mitch Iliff had a solid tournament both in the field and at the plate. Here he returns to first base for a potential pick off move late in the Lakeville South game. Photo by Bruce Karnick 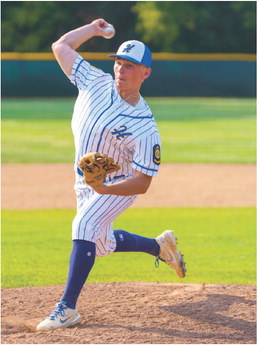 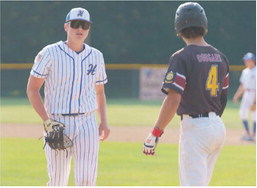