Fargo, ND – Skylar Little Soldier continues to wrestle herself into the record books, as she won her second straight national championship over the weekend.

Little Soldier, Trey Beissel and Blake Beissel made the trek to the Freestyle National Championships. The tournament features the top wrestlers in the United States and is put on by the US Marine Corps.

Blake Beissel wrestled at 113 pounds in the Junior Freestyle category for athletes 18 and under. The meet started with a round of 128 wrestlers. Blake won his first match over Stephen Meek of Utah by a score of 100. He then defeated Benjamin DiCocco of New Jersey in the Round of 64 by a score of 100. Both victories were technical falls.

In the Round of 32, Blake defeated Tyler Durden of Nebraska by pinfall and in the Round of 16, he defeated Anthony Isek of Colorado 154. Blake took his first loss of the tournament in the Round of 8 to Deion Johnson. At press time, Johnson was in the championship match.

In the consolation round, Blake lost to Nathan Desmond who ended up wrestling for third place. The brackets only assign the top eight finishers and by the looks of things, Blake finished in the top 10 in the US at the 113weight class.

Trey Beissel wrestled in the 16U category at the 94weight class. That class started in the Round of 64. Trey’s first match was a loss to Haakon Peterson of Wisconsin, which put him into the consolation bracket. Trey won the next five matches to work his way into a podium visit, defeating Jeremiah Waldschmidt of Colorado, Kendall Booker of Minnesota, Rider Seguine of Idaho, Caden Correll of Illinois and Wyatt Lees of Michigan.

That run of five wins gave him a spot on the podium. Out of roughly 40 wrestlers total at his age/weight class, he could place as high as third and no worse than eighth. A loss to Lincoln Rohr of Ohio and another loss to Sean Willcox of California put him in eighth place in the nation. Trey’s performance also earned him All American status as well.

Little Soldier started with a bye in the Round of 64 as there were only 44 wrestlers in the 127weight class. In her first match, Little Soldier defeated Elizabeth Riggs of Missouri 110, then beat Zoe Griffith of New York 122 in the Round of 16. In the quarterfinals, Alicen Dillard of Texas fell 60 to Little Soldier, and Dealya Collins of Wisconsin lost to her 82. That set up the finals match everyone was hoping for: Last year’s champion from the 117weight class, Cadence Diduch of Illinois versus last years 127 champion, Little Soldier.

The training for all three will continue as they prep for the high school season. Congratulations on representing Hastings and Minnesota so well on the national stage!

Skylar Little Soldier realizing she just won her second straight national title as a 16U wrestler at 127 pounds with her win over Cadence Diduch. Photo courtesy of David Peterson of Minnesota/USA Wrestling. www.mnusawrestling.org

Trey Beissel wrestled in the 16U, 94 pound weight class of the Freestyle National Championship in Fargo, MN. Trey lost his first match and bounced back with five straight wins before he lost two to finish eighth in the tournament. Photo courtesy of David Peterson of Minnesota/USA Wrestling. www.mnusawrestling.org 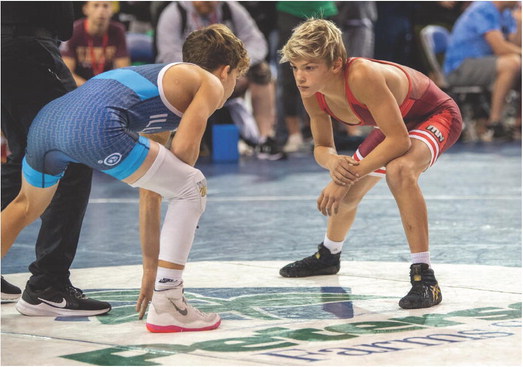