A passenger truck turned to head southbound on US 61 when a Hastings Fire Department ambulance, that was transporting a critical patient, was coming through the intersection of US 61 and Highway 10 at the Point. The truck hit the side of the ambulance nearly tipping it over.Screen capture of MN Department of Transportation video.
News
Truck collides with Hastings ambulance

According to a press release from the city of Hastings, on Wednesday, June 22 at approximately 6:45 p.m., a Hastings Fire Department Ambulance was involved in a collision while transporting a critical patient. The collision occurred at the intersection of Highway 61 and Highway 10 in Denmark Township. The condition of the patient being transported was not affected by the collision. Allina EMS responded to assist and complete transporting the patient to the hospital.

“When I arrived on scene, my focus was to get the patient transferred from our ambulance to Allina’s,” said Assistant Fire Chief Chris Paulson. “Once that patient was safely transferred, I went to check on the rest of the scene and the driver of the truck was no longer there.”

See CRASH. Page 5 The name and status of the driver of the pickup is currently not available. The MN Department of Transportation traffic camera video of the crash shows a very heavily damaged pick up in the middle of the intersection. Airbags appear to have deployed too. Onlookers rushed to the pickup to assist and that is where the video clip ends.

The ambulance has not been inspected by a body shop yet and a good portion of the damage does appear to be cosmetic upon a quick inspection. Which is a surprise given how hard the rig was rocked during impact.

The ambulance was using lights and sirens and reportedly had made their required slowdown/stop at the lights before proceeding through the intersection. The ambulance enters the right side of the MNDoT video heading north bound on US 61 as the truck begins its turn on to south bound US 61 into the path of the ambulance. The truck hit the side of the ambulance as it tried to swerve to avoid the impact. The driver of the ambulance did a great job keeping the rig upright and on the road. They stopped just north of the intersection off camera to assess the situation. That is where the Allina EMS team assisted with the transfer of the call to take over the transport. There were only minor injuries reported to the Hastings EMS team involved.

The ambulance is currently out of duty use until it has been fully inspected. Thankfully, Hastings has a total of three ambulances available for use so service should not be interrupted with the temporary loss of one rig. 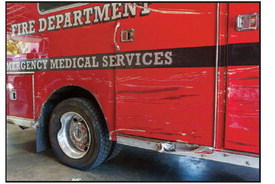 The Ambulance that was hit by a truck during a call last week looks to have mostly cosmetic damage. The one rim is destroyed and there are some deep gouges to the paint and accessory metal, but overall it looks to be still solid. The fire department will have more information once the rig is inspected by a repair shop. Photo by Bruce Karnick