Tom Wright the day he applied to run for Hastings City Council. He planned to wait until his kids were older, but after some encouragement he decided the time was now. Photo courtesy of Tom Wright
News
The time is now for Wright to make his city council run

A LOOK AT THE CANDIDATES: SECOND IN A SERIES

There are two open seats for Hastings City Council, with seven candidates running. The primary election to narrow the candidate pool will take place on Aug. 9, and the final two individuals will be chosen based on the number of votes on Nov. 8.

This is the second of weekly profiles of the candidates, who are: Joe Balsanek, 340 Crestview Dr.

Tom Wright is a family man, veteran, local business coowner, and former Executive Director for Hastings Community TV. He is also one of the seven people run$ See WRIGHT, Page 5 ning for a spot on the Hastings City Council.

The idea to run for a political office has been a dream of Wright’s since high school. He said the reasons for running are plentiful. He wanted a way to give back to his community, while setting an example for his seven children to go after their passions.

“I also wanted to become a doer instead of a talker,” said Wright. “I think it’s easy to sit back and critique government and make comments on social media, and I’m guilty of it myself, but at some point, if we really want to help, we should step up and match our actions with our words.”

The 42yearold said his campaign focuses on four areas including recruitment and retention of highquality city staff; mending a divided community; strengthening the relationship between the city and the school district and expanding winter recreation options for kids. Wright said the community feel is important to the identity of Hastings.

“I feel our community has been divided by politics,” said Wright. “I’d like to look into ways, events and messaging that could mend the community and give us a more positive vibe.”

Wright has a blended family with his wife Melanie. Their youngest children are twin 8yearold girls, and their oldest is a 23yearold son. Wright said his children get him involved in the community, and he regularly attends local events. Melanie Wright also manages his campaign and has supported him throughout the process.

“Melanie is very driven to get things done,” Wright said. “She has inspired me and helped me in many ways.”

The candidate has also been a board member of Hastings Family Service at the YMCA, as well as for a local theater company. He has been part of the Rotary club, volunteered to coach special Olympics, as well as coaching youth soccer for four years. Wright founded the Memorial Day March for Them, an annual walk along the Great River Road on Memorial Day. This was inspired by Wright’s desire to do more for those who died in combat. He spent three years in the Army from 19982001, and then fourandahalf years in the Minnesota National Guard.

Wright worked at Hastings Community TV for 15 years. He started as a producer and reporter, eventually becoming the executive director. He said his time there was a blessing and gave him great experiences and friends. Three years ago, he moved on to something new, and joined his wife with her business, Method Organization Co. The company does estate sales and moving.

Though work and activities for the kids keep him busy, Wright’s hobbies include visiting the dog park in the evenings with his three dogs: Cooper, Joey, and Clover. He’s also a member of the local YMCA and has recently taken to fishing with his children.

“We’re not having much luck so if anyone wants to message me what the secret spots are for fishing for kids, I’d love to hear it,” said Wright.

Educationally, Wright attended Brown College and received an associate degree in radio broadcasting, and a Bachelor of Science in communication.

Wright said he grew up Catholic, and is a member of two different churches, the Crossroads Church in Hastings, and Saint Joan of Arc Church in Minneapolis. He said his family doesn’t make it to service every week, but he certainly considers himself a man of faith, which is another aspect of why he’s running.

He said his background gives him multiple perspectives that could be useful for City Council. Wright said: “I have my experience as a reporter with HCTV, reporting on City Council and city matters, and working with city officials and staff. I’ve got a good look at behind the scenes and how it all works. Also, the perspective as a parent raising youth in this community and now as a local business owner.” 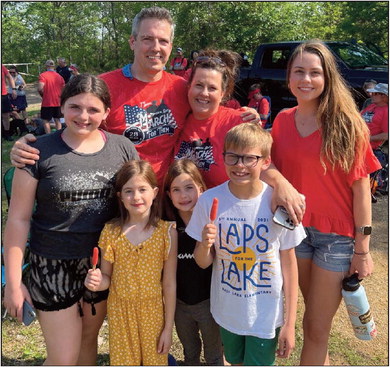 Tom Wright, Melanie, and the kids at one of the checkpoints at this years Memorial Day March for Them. From left, Vera, Tennille, Anya, Ben, and Alyssa. The two children not pictured are Aleah and Alex. Photo courtesy of Tom Wright