The girls 4x200 relay finished as the 15th best team in the state for 2022. They did not finish like they had hoped too, but they had a great time representing Hastings at the state meet. Left to Right Carlee Kordosky, Elliana Magnus, Madison Kennedy and Jaylen Hanson. Photo by Bruce Karnick
News
Raiders athletes compete at state track and field meet

Athletic Director Trent Hanson was at the meet for the prelims, and he was excited for the kids that made it there.

“It's a significant accomplishment to have kids at any level of state competition, and qualifying for the state track and field meet is a big deal. It's really difficult to get here,” said Hanson. “You have to be a section champion or a runnerup or meet a really ridiculously tough qualifying standard. So, it's awesome. It's fun for kids to come up here and compete and represent their school and have fun doing it.”

Hanson brought three of the kids to the meet himself, he laughed.

“They were pretty quiet. They were classic teenagers. They slept most of the way and had their earbuds in the rest of it. So, did I talk to them? Yes. Did they hear me? I'm not sure. But yes, they're excited. You could tell by their body language and just the vibe, they are ready to go,” he said.

The preliminary races ran in two heats. Each heat the fastest two made the finals plus the top five fastest between the two heats to form a ninerunner final. For field events, it was a oneday winner take all competition.

In the pole vault event, Isaac Ebeling represented Hastings. Ebeling won the Section 3AAA meet with a height of 12’3” which then became his seed height. At the finals, Ebeling finished 11th overall clearing 11’6”. The winner, Travis Reghard of Waconia cleared 15’3”.

The Hastings girls team of Madison Kennedy, Jaylen Hanson, Elliana Magnus and Carlee Kordosky, who ran the 4×200 relay, finished with a team time of 1:47.04. That finish was about half of a second slower than their seed time. That was the case for several of the 16 teams that raced. A half a second can be reaction time out of the blocks, it could be a slowed hand off or all three hand offs slowed. Had they run their seed time, they would have finished in 13th place instead of 15th, and they still would have missed the cut for Saturday. This was the first time going to state for these girls, and it was a great experience for them as they continue through school with the track team.

Elliana Magnus also qualified for the girls 200m dash as an eighth grader by placing second at sections. Magnus finished with a time of 26.92, nearly 1.3 seconds behind first place putting her in 14th place overall. It was a great run considering the majority of her competitors were juniors and seniors. Given her youth and talent, expect a few returns to state for this young athlete.

Johnny Bezdicek was the lone runner that made the state meet on the boys’ side, and he qualified for both the 100m and 200m dashes. Like his other teammates, this was Bezdicek’s first time qualifying for the state meet. On Thursday, Bezdicek ran a 10.99 in the 100m which put him in the top nine in the eight position, .33 out of first place. Later in the day, he ran the 200m in 21.78 which put him in sixth place, .46 seconds out of first.

“I feel like I ran decently today,” Bezdicek said. “My block starts weren't the best, but I have another chance on Saturday. I’m going to try to stay more calm, especially coming out of the curve on the 200. I feel like when I'm not calm, I lose form and then I get passed” Aside from working his starts on Friday and keeping more calm, Bezdicek added one thing to his list of stuff to change. “I think I need to prepare better in terms of nutrition, because I just ate breakfast this morning and I felt pretty good for the whole 100. But after that, I didn't really eat much. I just drink a lot of water. So, like if I got a little bit of a snack in between the races, I should be good to go.”

On Saturday, Bezdicek dropped almost .2 off his preliminary time to reach 10.8 in the 100, moving him to the podium as the fifthfastest runner in the state. In the 200m, he also cut time and finished fourth overall with a 21.57, just .44 behind the firstplace finisher. Luckily for Hastings, the speedy wide receiver in the fall and sprinter in the spring will return to Hastings for one more year as he made it to state as a junior. 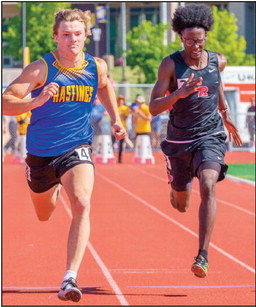 Johnny Bezdicek qualifies for the 100m dash finals with a time of 10.99 and an eighth place preliminary finish. Photo by Bruce Karnick

Isaac Ebeling won the Section 3AAA pole vault competition with a height of 12’3”. Sadly, for the state meet, it was not his day. Ebeling bowed out with a final height of 11’6”.Photo by Bruce Karnick