News
Softball goes 3-3 for the week

The Raider softball team had a marathon week playing six games in five days with four of those games being part of 5inning double headers.

On Monday, May 2, Hastings travelled to South St. Paul to take on the Packers, winning that contest 63.

On Tuesday, May 3, Burnsville came to town on Teacher Appreciation Day. Hastings fell, 111. Kylie Evans had a spectacular day at the plate going 3for3 with three singles. Reanna Reinke had a double and Jessica Peine scored the only run for the Raiders on some smart base running, scoring from second on a wild pitch. Mack Tryba got the start on the mound for Hastings going three innings. Tryba allowed five earned runs and five hits on 55 pitches, striking out three and only walking two. Haley Strain took over in the fourth and finished with four innings pitched. Strain threw 84 pitches, allowing two earned runs while striking out seven and walking two.

On Wednesday, May 4, Hastings played host to a double header against Tartan where they split, winning the first game 85 and dropping the second 10.

On Friday, May 6, The Raiders travelled to HillMurray where they split the double header, losing game one, 51 and winning game two, 82. In game one, Lauren Jenkins had the lone run batted in for Hastings. Tryba once again started the game on the mound for Hastings. Tryba went three innings allowing four runs on seven hits. Strain also took over the remaining two innings of this game, allowing one unearned run. Game two had no stats available for Hastings.

Hastings has another crazy week of games: May 10 at Two Rivers 3:45 p.m. first pitch, then May 11 at Simley at 4 p.m. May 12, they head to Visitation for a 4:30 p.m. first pitch followed by May 13 at North St. Paul for a 4:15 p.m. game. Finally, the Raiders celebrate Hastings Softball Day on Saturday, May 14 at Veterans Park. Youth Games start early in the morning and culminate with an 8 p.m. varsity game against Mahtomedi. 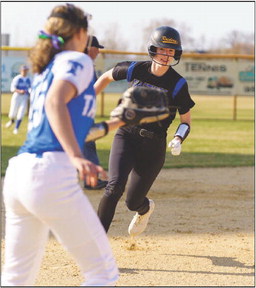 Kendal Jenkins advances to third and was stranded there during the first inning of the Tartan double header at Hastings High School. Photo by Bruce Karnick