Head Coach Ryan Stoffel and his staff have the Raiders not only playing great baseball but having fun doing it.

“It’s a fun group and they have awesome chemistry,” explained Stoffel. “They really play for each other. There’s just no big ego in our dugout. There is no one who thinks they are bigger than anyone else. They all show up and pull their weight. As you can see, we have 1011 kids in there that are all reserves. They were full of energy all seven innings.”

The chemistry in the dugout is undeniable. It’s a great group of kids and they are performing at a high level. They cheer for each other’s successes and lift each other up when they fall, and they are winning doing it.

On May 4, Hastings travelled to Mendota Heights to take on Two Rivers. The Warriors took the lead in the first, 20, then added one more in the second. After four scoreless innings from Hastings, the Raiders scored four in the fifth to take the lead, then doubled up on the Warriors in the sixth for the 83 win.

Offensively, Tanner Anselment led the team with three runs batted in and Jackson Schaffer had two, all from home runs. Gavin Odman, Connor Stoffel and Mitch Iliff each had one.

The comefrombehind win with two home runs was certainly exciting to watch, but the Friday night game at South St. Paul was exciting and weird.

Hastings took the early 40 lead in the first inning, Schaffer, Stoffel, and Hendrickson all had singles with Hendrickson’s single scoring one. Eddie Peine hit a double scoring one, and Iliff scored two on a ground out. In the bottom of the first, South St. Paul scored two, cutting the Raider lead in half. They then scored three more in the second to take the lead.

Hastings scored three of their own in the third to take the lead back, 75. The key piece of the timing of the early innings revolved around the position of the sun. Both teams’ players were struggling with the sun in their eyes hitting in the middle innings. That started with bottom of the third until the top of the fifth when Hastings scored three more to make it 105. That is when the lights kicked on and started messing with both teams and their defenses. The lights at the Packers home field are about 5060 feet too short for the field. That forces the light into the eyes of the fielders at nearly every angle, including plays at ground level. That caused numerous errors for both teams.

The Packers scored five in the bottom of the fifth to tie the game at 10. Just when fans thought it could not get any crazier for the night, Hastings had a huge sixth inning. Every batter in the lineup contributed to the sixth, and the Raiders scored 10 runs to win the game 2010.

“We started Connor and he didn’t have his best stuff tonight,” explained Coach Stoffel. “We got two innings out of him. He barely got through it, so we brought Gavin in. It’s the earliest we have had to bring someone in all year. Gavin responded well, the team responded well and then we just kept trading touchdowns.”

Gavin Odman went three innings giving up three earned runs, and Aaron Vandehoef closed out the game for Hastings to earn the win. 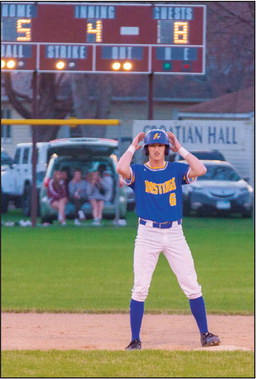 Eddie Peine crushed a double to right center in the fourth inning firing up the Raider bench and setting the stage for a huge fifth and sixth inning. Photo by Bruce Karnick 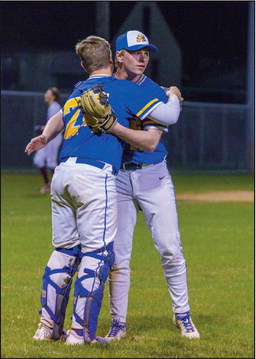 Catcher Johnny Teigland and Pitcher Aaron Vandehoef celebrate the wild and whacky 2010 win in six innings over the South St. Paul Packers under the lights in South St. Paul.Photo by Bruce Karnick