Spring is finally here. How do we know that? The local baseball season is underway. No, not the Raiders those boys are off to a fantastic 100 start on their season. The Hastings Hawks kicked off their season Saturday with a win over the Ellsworth Hubbers in Amateur Baseball action. This was the first game of the season for both teams.

“With it being the first game of the season, I’m going to limit the pitchers to three innings max,” manager Shawn Matson said before the game. “I don’t want to wear the guys out or risk any injury, so we are just going to go out and finally play some baseball.”

Nick Horsch led off the season opener for the Hawks in only the way Horsch could. He made it to first after being hit by a pitch, something he has led the team in for the last few years. The starting pitcher, Jason Georgakis, had a lightning quick pick off move to first base and he quickly cleared Horsch off of first. Jason Greeder came to the plate and hit a single to right, then stole second. A later error on the Hubbers third baseman allowed Greeder to score giving the Hawks the 10 lead.

Hastings then scored four in the third, with Horsch reaching on a single. Jordan Jeske crushed a triple to right scoring Horsch. Ben Bundschu hit a single scoring Jeske, and then Cory Wolters made it on due to an error by the right fielder. Evan Khrin hit a single, scoring Bundschu, and Jake Sandquist had a sacrifice fly scoring Wolters to give the Hawks the 50 lead.

Max Bundschu started on the bump for Hastings and kept the Hubbers batters off balance for his three innings of work. Bundschu threw 44 pitches, striking out three, walking one and only allowing one hit in the second inning. Dennis Reinhart pitched one inning allowing two earned runs on two strikeouts, two hits and two walks. Khrin pitched one inning allowing four runs, two earned with one strikeout and two walks. Douglas Nordine pitched the final two innings shutting down the Hubbers offense.

Sunday, Hastings had its first league game of the season when the Northfield Knights came to town. Northfield won 70.

Northfield scored seven runs on 11 hits with zero errors, and they left 16 on base. Hastings mustered only four hits all game, leaving all four runners on base, and they committed two errors in the field.

Jordan Jeske started on the mound for Hastings and was hitting his spots. Unfortunately for Jeske, the umpire did not see the same thing the rest of the world saw, and the spots were frequently called balls. Jeske ended up pitching six innings, tossing 131 total pitches, 79 strikes and 52 balls. Jeske held the Knights to three runs. Ben Bundschu took over for Jeske in the seventh, allowing three runs on 43 pitches with one strikeout and two walks in two innings. Patrick Rough finished the game for Hastings.

Hastings plays on May 13 against Wanamingo at 7 p.m. at Veterans Park then travels to Rochester to take on the Royals on May 15 for a 2 p.m. game. 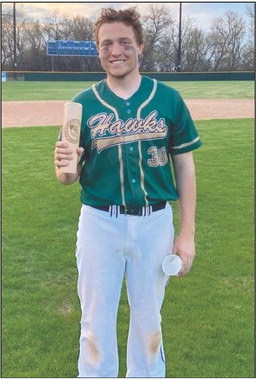 Jake Sandquist was awarded the player of the game against the Ellsworth Hubbers. Sandquist went 3for4 with three RBI’s offensively and played a great game behind the plate.Photo courtesy of the Hastings Hawks.