Kyra Bartholomew placed second in the girls 100 hurdles with a 17.65.

Many of the Hastings relays did well, unfortunately, the score sheet only lists the school name and not the individual participants of the team.

4×800 relay. Boys third and girls did not have a relay for this race.

High Jump had Alyssa Bauer in second for the girls.

Pole Vault Lara Deshler took third for the girls and Jonathon Watson fifth for the boys.

Kyra Bartholomew landed in fourth for the girls long jump and Carlee Kordosky triplejumped her way to sixth.

Hastings had two boys in the top five for triple jump, Max Albertson and Payton Leedean.

Hastings will travel to Eagan for the Section 2AAA True Team meet on May 10th. 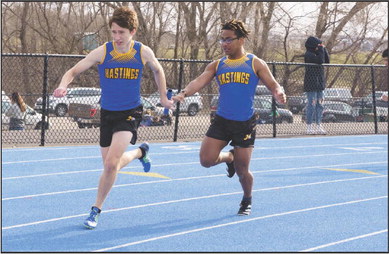 In relays, the most important piece of the race is the baton exchange. The handoff of the baton can make or break a relay. Here, Payton Burow makes a clean handoff to Steven Krey in the 4×200 relay, a race that Hastings won.