The Raider baseball team under first year head coach Ryan Stoffel is on a tear through the Metro East Conference (MEC), having won all eight of their games so far this season. The Raiders are not only undefeated, but in the first eight games, they have outscored opponents 5911 and they sit atop the MEC at 60 in the conference, one game ahead of Mahtomedi and two over St. Thomas Academy.

On April 26, Hastings traveled to Simley to take on the Spartans. Hastings jumped out to the early 10 lead in the top of the first and never looked back scoring in in the first and third innings and two in the fifth to win 41. Alex Hendrickson earned the win on the mound for Hastings with five innings pitched and an ERA of 1.4 Hendrickson walked two and struck out 5.

On April 27, HillMurray came to town and again Hastings took the early lead scoring seven runs in the four of the five innings before the Pioneers scored one. Hastings earned the win 101. Gavin Odman was the winning pitcher of record. Odman walked three and struck out six with an ERA of 1.17 in six innings pitched. Eddie Peine shut the door in the seventh to seal the win. Jack Seleski, Evan Nelson, Jarod Neuville, Jackson Schaffer and Alex Hendrickson all had one RBI and Connor Stoffel had three RBIs.

The Raiders were not done in the marathon week. April 29, they traveled to Apple Valley on a cold, windy and rainy night. The Raider bats were a bit sluggish to start. Hastings took the 10 lead in the top of the second when Johnny Teigland knocked in Tanner Anselment on a ground out to first. Apple Valley tied the game in the bottom of the third and that woke up the Raider offense.

Hastings scored two in the top of the fourth. Odman was walked then advanced to second on a passed ball. Carson Thuet was walked and so was Teigland, loading up the bases. Eddie Peine crushed a double to right center scoring Odman and Thuet.

In the fifth inning, Hastings added four more. Hendrickson was walked, Mitch Iliff hit a single to right advancing Hendrickson to third. Iliff stole second, and Anselmen hit a single up the middle to move Iliff to third and score Hendrickson. Odman crushed one to left center scoring Iliff and Anselment when the fielder misplayed the ball for an error which advanced Odman to second. Thuet moved Odman to third and eventually Odman stole home on a double steal call thanks to a great diversion from Teigland after he was walked. Hastings had the lead 71.

Apple Valley put up two late in the game, but it was not enough to overcome the hole they put themselves in.

Connor Stoffel went the distance on the mound for the win, walking only one while striking out four. Teigland and Anselment each had an RBI while Odman and Peine had two.

The final game of the week was supposed to be played on May 2 at North St. Paul, but their fields were not playable, so the game was moved to Hastings.

Again, Hastings took the 10 lead in the first and ended up winning the game 81. Odman threw the complete game win walking one and striking out one with one earned run allowed. Teigland, Seleski, Axel Arnold and Schaffer each had an RBI and Iliff had two.

With the excellent four games of play, Hastings extended their win streak on the season to eight. 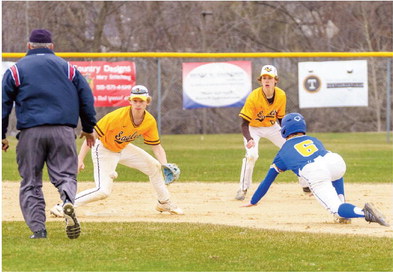 Eddie Peine steals second to put another runner in scoring position during the Raiders 73 in a cold and rainy game at Apple Valley.