Current Police Chief Bryan Schafer is set to retire at the end of May. Schafer’s retirement was announced December of 2021, giving city staff ample time to go through the process of finding his replacement. City Administrator Dan Wietecha explained the process at the May 2 City Council meeting.

“Over the past couple months, we have had a series of interviews for Police Chief,” explained Wietecha. “Key among them was a community partners panel with representatives from Dakota County Social Services, 360 Communities, IDEA, Ally Services, and Hastings Ministerial. These partners brought vital perspective on key trends and emerging issues. Additional panel interviews were conducted with HPD staff and with City Department Heads. The Police panel included representatives from patrol officers, supervisory officers, records support, and Dakota County Sheriff’s Office. A oneonone interview was conducted with the City Administrator. The final interview was with the Public Safety Committee of the City Council, Councilmembers Leifeld, Braucks, and Lund, as well as members of the Public Safety Advisory Commission, Pemble, Ascheman, and Auge. Following the final interview, we reached a consensus agreement to recommend appointment of Dave Wilske as Police Chief. Wilske has served as the HPD Deputy Chief since 2017 and has been instrumental in fostering the Department’s strong culture of service and community engagement. Prior to coming to Hastings, he worked for the University of Minnesota Police Department for 20 years, where he progressed to the rank of Patrol Lieutenant.”

“Throughout a series of interviews, Deputy Chief Wilske impressed us with his uplifting leadership style, deep engagement in our community, and strategic and forwardlooking mindset,” added Wietecha.

Since joining the Hastings Police Department, Wilske has led department training and development, fleet management, emergency management and supervised the investigative and evidence room operations. He has been instrumental in forming partnerships with key community leaders and groups, including IDEA: Inclusion, Diversity and Equity Alliance in Hastings. Most recently, the partnership between the Hastings Police and IDEA received statewide recognition from city peers.

Chief Schafer said, “Wilske brings compassion, vision and energy to the organization. He is a strong leader and extremely capable of leading the HPD and fulfilling the expectations of our community. We have worked hard on succession planning and I could not be happier about this recommendation. I'm extremely proud and I couldn't think of a better person to take over the police department. We've been very fortunate. I've said it all along that Dave Wilske was a

Photo by Bruce Karnick game changer for our organization and the culture of change that we've tried to affect and he is he's handled it well and he's deserved this promotion.”

Deputy Chief Wilske is ready for the opportunity to serve as the Hastings Police Department’s next Chief of Police.

“This actually means a great deal to me. Five years ago, when Chief Schafer offered me the position to come to Hastings. I was taken aback by the support from the community and the professionalism that the officers displayed day to day, and this is something we've been working for the last five years is our supervisor succession plan within the department so we can keep moving our vision forward. So, I'm very excited for the future,” Wilske said after the city council meeting.

Being that Chief Schafer and Deputy Chief Wilske were being interviewed together, Wilske had to give his mentor a bit of a ribbing. “But these are big shoes to fill. So, obviously, I can't measure up to Chief Schafer, but maybe, maybe I can get close.”

When asked about one thing he hopes to take away from what he learned from Chief Schafer, Wilske had this to say. “His humor and opendoor policy, we hear about that all the time. But what I really realized is what an opendoor policy means. When someone comes in your room, you set your pen down, and you pay attention no matter how long it takes. So, that's something I've been working on over the years because we get caught up in our daytoday business, and we get extremely busy. So those are attributes that I really appreciate from Chief Shaffer.”

What does Chief Schafer mean by relax? “You know, I serve on the school board in my community, so I'm busy doing that,” added Schafer. “I've got a number of hobbies and I've got some consulting jobs on the side, so I'll be plenty busy. I hear people are busier when they retire than when they were when they were working so…” With the transition plan taking shape to move to Wilske as Police Chief, Administrator Wietecha expects there will be additional promotions in the next few weeks within the Police Department.

The City of Hastings released a statement thanking Chief Bryan Schafer for his commitment to the Hastings community.

Last December Chief Schafer announced his retirement as the 55th police chief to lead the Hastings Police Department during its 165year history. During his tenure he has deepened the department’s engagement with the community, hired or promoted 75 percent of the department, and implemented structural changes that have led to greater professionalism, autonomy and accountability among the 36 staff and Police Reserve Unit.

City Administrator Dan Wietecha said Schafer set the bar high for himself and his department in a number of areas, and his leadership will be missed. “Chief Schafer has made a huge impact on this community through his strong leadership, community engagement and departmental impact externally and internally. He’s worked closely with our Mayor and City Council leaders and with law enforcement organizations in Dakota County and across the state to collaborate on implementing safety protocols and solving crimes.”

Schafer said, “After nearly 39 years as a police officer, it’s time start a new chapter. Serving as Hastings Police Chief has been the most humbling experience of my career. I want to thank the community for their support, and express my gratitude to the HPD staff for allowing me the honor to serve with them.”

Schafer said retirement will include a mix of travel, projects, hobbies and professional work. “I plan to do some consulting and to continue to serve on my local school board,” he said. 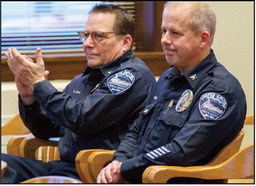 Retiring Chief Bryan Schafer applauds the appointment of his Deputy Chief, David Wilske to the position of Chief during the May 2 City Council meeting. Congratulations Chief Wilske on the promotion that will take effect at the end of May.