News
Boys Lacrosse wins three in a row, moves to 4-1

The Raiders came out quickly on Monday night, April 25 with senior Colin Duerkop getting the first three goals. The defense was tough early which really helped the Raiders in the second as they struggled a little offensively in the quarter. Even with the struggles, Hastings defeated Park at home 146.

Luke Chorlton led the Raiders in scoring carrying the load Monday night. Kody Niederkorn and John Chorlton did help Luke with the heavy lifting with some real nice assists. Luke not only scored against the Wolf Pack, he also lead the team in assists as he does for the year. Niederkorn had a real nice game Monday night. Along with his three assists Niederkorn scored three goals by utilizing an amazing fake shot to fool defenders. He also managed to reach a couple of balls that appeared to be thrown way out of his reach. Niederkorn, Duerkop and Ben Zaccardi shared time last year and are being called on this year a lot more to produce on the field. Zaccardi played well and while his unorthodox style can be frustrating to watch, it gets results. Zaccardi earned another goal and is being called on to play both short stick, middie and attack positions this year.

Tom Reifenberger had another real good day at the face off dot. Winning face offs is very important in the game of lacrosse and the newcomer Reifenberger has been a real bright spot for the Raiders this year. Ryan Clemens and Ben Clemens are both playing well, as is Wyatt Vieth. Vieth got a little banged up in the game but was ready to play against Simley.

The defense was good in the game and was led senior long stick middie John Chorlton. Every time something happens it seems to start with number 35. He plays as well as a short stick middie and as an LSM, he seems to do everything. He had a goal in the game that the goalie did not see, and he starred him down before shooting, the goalie didn’t move, and Chorlton beat him clean.

Brady Nickel again showed why he was an allsection selection last year. He is tall and long and can run like a deer, he also seems to have a little bit of a mean streak. Which is needed when playing defense in lacrosse. One of his defensive partners Owen Glad also had a good game, with a couple of takeaways and playing good pressure defense. As a senior Glad has been waiting for his opportunity and is making the best of it this year so far.

The Raiders travelled to Inver Grove to take on the Simley Spartans winning that contest 141 on Tuesday, April 26, then defeated Two Rivers on Friday, 190 at home.

Next up for Hastings is Spring Lake / Coon Rapids on May 4 at home, then they travel for two games. First stop is Mahtomedi on May 6 and then Rosemount on May 12. All three games are scheduled for 7:00 p.m. 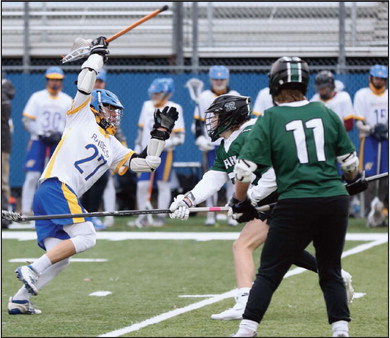 Luke Chorlton used his speed and elusiveness to get past the Park defenders, but not before he took a stick to the thigh.