The trend of declining enrollment at the Hastings Public Schools is expected to continue, despite what seems to be a housing boom taking place in the community in the next several years.

Educational consultant Hazel Reinhardt shared data with the Hastings School Board at an April 13 work session that shows less students in the district in a decade.

“We have more people leaving the state than moving to it,” she said, describing the Minnesota climate. “We’re in a different environment.”

students. The Hastings Public Schools has a 79.6 percent “market share,” she said, noting that 320 students this year elected for other public education options. The district does attract some nonresidents, as 2.3 percent of the total enrollment in 202122 was from “Nonresidents,” which she termed “an exceptionally low percentage.”

She noted that in a decade, “Kindergarten is projected to be smaller than the previous year’s Grade 12, a continuation of the pattern of the past 10 years, which is the cause of the projected enrollment decline.”

Reinhardt said that in five years, the 202627 school year, kindergarten through fourth grade enrollment will be 60127 students higher than this year, while the middle school will see 81118 less students and the high school 153176 less students.

“When you look at that against the enrollment that’s very, very small. You had districts that had 5 to 10 percent disappear during the pandemic,” said Reinhardt.

Reinhardt attributed much of the decline in enrollment to families being smaller than they were years ago.

She remarked that in a study conducted 15 years ago in Lakeville, they were seeing one student per housing unit. In Hastings, the average expected is .55 students per single family home. 22 students from townhomes and from apartment, “You need 10 units to get one kid,” she said.

Reinhardt surveyed the board room following her presentation.

“This is good to know. It’s helpful,” said board Chair Brian Davis.”

Superintendent Dr. Robert McDowell said that brining in someone like Reinhardt is “a way to get the board some significant information to help you process what to do next.”

“Some of it’s a little somber,” said Davis. “All these things are relative to what we need to do to make sure we’re thriving, knowing that enrollment is going to be where it’s going to be.” 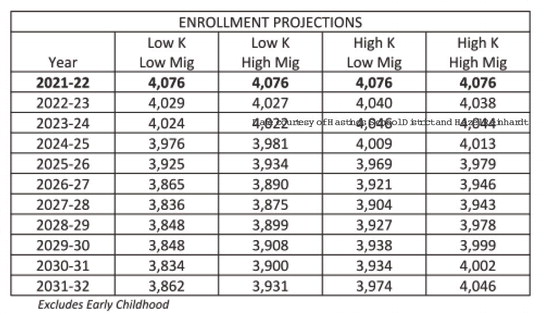