peted in the River Falls Wild _

Similar to what every other spring sport has dealt with throughout the 2022 season, it was raining and cold and play _

ing conditions were tough dur _ ing the entirety of the round. Despite those conditions, River Falls earned a second _ place finish with a team score of 323, Ellsworth finished sixth with a score of 360 and Prescott fin _ ished ninth with a score of 400. There were 11 total teams at the tournament.

Leading the charge for the second _ placed Wildcats, which trailed only Eau Claire Memo _ rial’s outstanding team score of 311, was junior Matthew Mar _

sollek, who posted an individ _ ual winning score of 77 after shooting a 40 on the front nine and 37 on the back nine. Mar _

“The wind was the toughest part of the round,” Marsollek said. “On number three I had 150 yards into the green and I hit eight _ iron, which is my 180 _ yard club, and I came up short. It was brutal. Yeah, I def _ initely expected (to beat a lot of the competition).”

Marsollek stated that even after making double _ bogey at the first hole, he was confident that he would bounce back and put together a solid round. Throughout the 2022 season thus far, Marsollek has been stringing together great rounds.

Prescott junior Jakob Hegemann rolls a putt on his final hole of the Wildcat Invitational as the rain began coming down. The invitational was Hegemann’s first competitive 18 _ hole round for Prescott. ________________________ GOLF

“I’m very happy with today,” LaVold said. “We know we’re solid at the top with two guys that can really play, and we know we have a third guy that is capable of putting up really good numbers. We’re looking for our four and five and Will (Benedict) showed he wants to be in that mix. I’m thrilled with that.”

LaVold spoke about the two scores at the top with Marsollek and senior Trey Timm, who posted an overall score of 78, one shot out of a tie for first place. Sophomore Will Benedict posted an 83, his best score of the season and a number that if shot consistently, would put him firmly on the varsity roster long term.

“When he played JV last year he played from the white tees and the blue tees on this course are a lot tougher,” LaVold said. “When you mix in the round in the rain and how he played well, the fact that he posted a solid score is great. If we could have two guys shooting what Will (Benedict) shot, we have a chance to go to state with this group.”

Ellsworth’s overall team score of 360 is a promising result for the Panthers, as they de feated Prescott by 40 shots at the tournament, which is indicative of what can be expected throughout Middle Border Conference meets.

For Prescott, the Wildcat Invitational was the first meet of the year with multiple kids playing competitive golf for the first time. Prescott head coach Jay Bartsch spoke about that situation along with the conditions on the course and re flected on the day.

“I think in general it was pretty good,” Bartsch said. “My number one player (Tyler) Reiter finished top ten by shooting an 80, so that’s positive. For their first round and the con ditions, I thought it was a pretty good round for them.”

Two of the five varsity starters played 18 holes competitively for the first time at the Wildcat Invitational in Stanton and Hegemann. Bartsch spoke about those athletes getting their first experience on the golf course.

“I know Hegemann’s coming in with a pretty high score, but it’s his first year out for golf, he didn’t know what to expect,” Bartsch said. “Same thing with Finn (Stanton), it’s the first time they’ve played 18 holes.”

On Thursday, April 21, the Spring Valley golf team competed in the second Dunn St. Croix Conference match of the season at the Valley Golf Course in Mondovi.

Spring Valley posted a total team score of 234, which slotted them into a fourth place fin

ish ahead of Mondovi’s last place score of 238. Finishing ahead of Spring Valley was Durand in first with a score of 189, Glenwood City’s 194 and Colfax’s 210.

The next meet on the schedule for the Spring Valley golf team is slated for Wednesday, April 27 at Whitetail Golf Course in Colfax. That meet is slated to begin at 9:30 a.m. 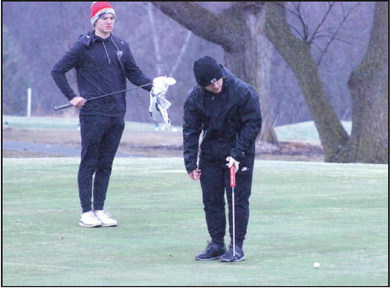