look on. Photo by John McLoone.

Coming off wins against Elk Mound and Lakeland the past week, the Oriole boys kept up the momentum, scoring a win against Regis on Tuesday with a final score of 71 – 51, and follow ing this up with a win against Osseo-Fairchild after initially finding themselves down Friday, coming away with a 66 – 31 finish. Coach Tom Hause shared some thoughts after the game.

"We had balanced scoring in both games," he said of Regis and Osseo-Fairchild. “We have a number of players that can lead us in scoring each night." As to game specifics, Coach Hause said of the Ramblers that, "Against Regis we were able to limit looks by their top shooters," while of the Thunder that things went the wrong way initial- ly, before turning around.

“We started slow vs. O-F and needed to pick the pace up," he said. "Osseo-Farichiuld was faster and more physical than we were in the first half. We made some adjustments and were able to get some shots from the low post in the second half." Along with turning things around against the Thunder after adjustments were made Friday, Coach Hause also looked to wards the future.

“Our bench players have been improving and Photo by John McLoone.

playing well," he said. "That will be important for us moving forward." As to game play against Regis, the top scor – ers were Lucas Smith, Henry Hoel, and Carsen Hause. Of the three, Smith made 18 game points while Hoel made 16, Hause coming away with 13 total against the Ramblers.

As to the game at Osseo-Fairchild against the Thunder things were much the same, with Smith making 20 points, Hoel making 12 points, and Hause making 10 points overall for the Orioles.

The Orioles next face off with Cadott at Stanley- Boyd this Friday.

Henry Hoel sends the ball toward the basket in Tuesday's game against Regis. Photo by John McLoone. 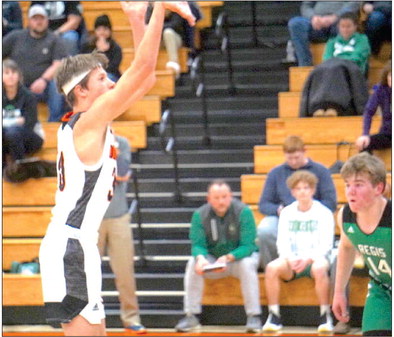 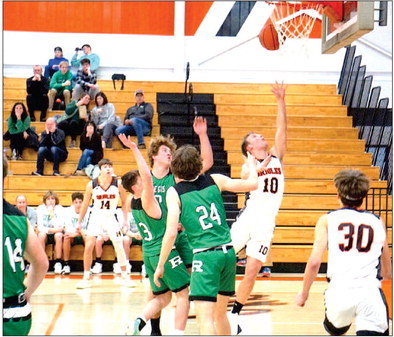 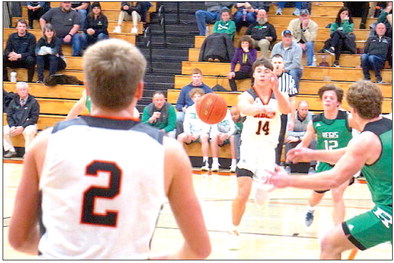