Park’s Brayden Fick drives to the basket in the final minutes against Mounds View. Photo by John Molene
Sports
Park boys knock off No. 7 Owatonna

Park wrapped up a busy three-game week Saturday afternoon with a big 58-52 overtime win over Owatonna in a non-conference game played at Kasson-Mantorville in the Rochester Hoops Challenge.

Owatonna came into the contest as the seventh-ranked team in Class 4A according to the latest Minnesota Basketball News poll. Park was No. 18 in that same poll.

The win snapped a twogame losing streak by the Wolfpack. Park improved to 6-4 on the season.

Standout senior Pharrel Payne made his season debut for the Park Wolfpack Friday, but it was the host Woodbury Royals who scored the victory in a 51-39 decision at Woodbury Friday.

Payne – bound for the University of Minnesota — played for the first time this season and scored eight points. Payne had been sidelined with a hip condition prior to Friday’s game.

The Royals put the clamps on Park defensively, allowing the Wolfpack just 17 first-half points while taking a 23-17 lead. The second half was more of the same as Woodbury outscored the visitors 28-22 after the break.

Park slipped to 5-4 overall and 2-2 in the Suburban East Conference. League0leading Woodbury improved to 5-3 and 3-0 with the win Friday.

Mounds View 67, Park 57 It was too much the Kobe and Dylan show for the Park Wolfpack in boys basketball Tuesday night.

Mounds View senior guards Kobe Kirk and Dylan Wheeler each scored 27 points as the visiting Mustangs dispatched host Park 67-57 in Suburban East Conference play. Park came into the game as the tenth-ranked team in Class 4A but couldn’t match the firepower of Kirk and Wheeler who both bombed in from the outside or drove to the basket for easy layups.

“You’re in a different ballpark now, said Park head coach Mike Weah when asked what he told his team after the game. “When you’re going in this conference every night, this SEC conference is a tough thing. It is a tough draw every night. You have no breaks and tonight we saw that those two guards from Mounds View – 27 each – we weren’t expecting that. Our guys didn’t think that they’d be that much on fire. That guard combination has to be one of the best guard combinations in the state to me. They’re going to be a problem in this conference for sure this year.”

It was a tough home-court loss for the Wolfpack, who fell to 2-1 in the conference and 5-3 overall.

Park stayed close most of the game and trailed by just 54-47 with 5:07 to play. But the Mustangs held off Park down the stretch with solid play at both ends of the court. 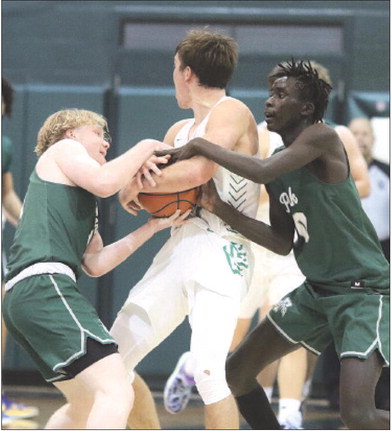 Park’s Brayden Fick and OT Omot tie up a Mounds View opponent in the late going of Tuesday’s game. Photo by John Molene