This hunt took place in a management unit where bucks had to have either a 15 inch inside spread or a main beam of 18 inches or more.
News
Journal

The next two weeks this column is going to be as loaded with as much info as I can put in it about a trip, I took with my daugh – ter Selina who is a junior at UW Stevens Point. Selina and I met my brother Tom Walters in The Delta National Forest in west central Mississippi and camped, canoed and hunted for whitetail deer and wild boar for 7-days.

Record heat would be the theme of this incredible adventure in several ways and for the most part it shut down daytime move- ment for deer and hogs. When Selina and I left Necedah at 11:00 pm on Christmas night the first form of rough luck was that all gauges on my pickup ceased to function twenty miles into our drive. Selina is sharp and rigged up the gps on her phone for a speedometer.

We camped remote and after a 908-mile drive pulling a trailer met my brother Tom close to our bayou campsite deep in a forest that was flooded at a level of six feet on most trees for 212 days back in 2019. That record flood led to the demise or relocation of most deer and hogs as they either left or were stranded on high ground where many of the hogs were shot from above and much of the 2019 fawn crop was killed by raccoon and hogs, just think about that for a minute.

The three of us hunted here that fall for the first time and had no idea about the flood until we arrived. Neither Tom nor I saw a deer. Selina saw two bucks, but we are in a management zone where bucks have to have a 15-inch inside spread or one beam that is at least 18-inches in length.

Our 7-day license that would allow us to harvest up to three bucks but only one a day also gave us small game and waterfowl licenses and cost $185.00 In reality, Selina and I had a main goal of harvesting a good- sized hog as it was a different species than we see in Wisconsin. Feral pigs are despised by a large percentage of people in the south due to the damage they due to the forest, agriculture, and potentially fawns and turkey.

Our camp was on a bayou, and we had one other campsite in our area and that was occupied by long time hunter and super cool guy Bob Harvey and friends and family. Bob is Mississip – pi's first 7 level black belt and was an instructor for fifty years. On day one Bob named Selina "Yankee Girl" and that was all she was called the entire week. We were at camp 7-days and Bob who was there for 14 would not start hunting 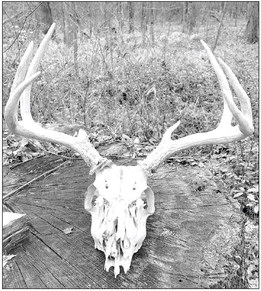