Being the number one goalie on a team that is having difficulties scoring can be a stressful position, especially for a first-year starter. Nicole Vander Hayden has played well for Hastings this season despite the 5-11 record. Photo by Bruce Karnick
Sports
Girls Hockey starts 2022 ready to go

After ten days of no games for the Raiders, the ladies looked to start 2022 off with a win. There are only 10 games left in the regular season between January 8 and February 1 and if Hastings wants to get anywhere in the section, they need to come together as a team now.

Big Nine Conference leading Owatonna, 7-6-1 overall and 5-0-0 in their conference was the first opponent of the new year, a tough team to start fresh against. The interesting thing about Owatonna is all their wins came at the beginning of the season. The Huskies started the season with six straight wins then a loss to Rosemount and another win. They have not won a game since December 16 and are 0-5-1 in their last six. Hastings could be catching them at the right time, but Owatonna is likely thinking the same thing.

Owatonna took the lead late in the first period scoring twice in less than two minutes. They added a third goal in the second period and a fourth in the third. That is when Makayla Berquist scored a shorthanded, unassisted goal to keep the Raiders from being shut out. Owatonna tacked one more on in the final minute of the game to win 5-1.

The Raiders consistently show sparks of what they could be. The first eight minutes of the game, they looked like a different team. Great puck movement, creating shooting lanes on offense, closing shooting lanes on defense. It really felt as if things were starting to come together for the team. Then Owatonna took a 2-0 lead to the locker room.

The play of the Raiders regressed on the ice, even the girls knew it. Chatter on the bench was talking about doing what they know how to do. Stick to the game plan.

Owatonna outshot Hastings 35-16. Both teams failed to score on the powerplay, Owatonna going 0-for-4 and Hastings 0-for-2. Three of the Hastings penalties went to Lauren Skov, the Raiders most aggressive skater, all three of Skov’s penalties centered around her aggressive play style. Something you love to see in the boys game, but is not allowed in the girls game.

Chatting with players informally after the game, the frustrations are clear. They know they have a good combination of skilled players, many love Head Coach Tim Duggan, others are struggling with his old school style of coaching. Observing practices and games, Duggan is an old school dad. He’s going to yell at you for not listening and not following directions. He’s going to call you out on doing something wrong and he is doing that out of love and wanting to see you succeed. He cares about his girls, it’s clear when you talk to him. He doesn’t just yell at them either, he’s also there supporting them and makes it clear he tries his best to lift them up and be there for them not just for hockey, but life stuff too. A delicate balance for a male coach in a female locker room. These things don’t always get talked about.

The girls are so close to flipping that switch. You can see it in spurts on the ice and at practice, you can hear it on the bench. If you were at the Burnsville tournament, you saw it against Park, there was finally a team that believed in themselves. Coaches and Parents can only say it so much, eventually, it comes down to the kids picking each other up and believing in themselves.

The next chance to catch the girls in action is January 14 when they host the combined team of North St. Paul and Tartan. Then Mahtomedi comes to town on January 18 and Simley on Jan 21. All three games are scheduled for a 7:30 puck drop. 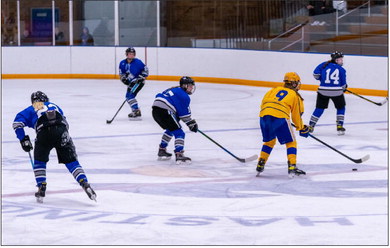 Makayla Berquist scored the lone goal for the Raiders against Owatonna to make the score 4-1.Photo by Bruce Karnick