For the 2021-22 iteration of the RFHS girls basketball team, there have been flashes of brilliance among the growing pains that are inevitable for a roster that features no seniors and is fairly inexperienced at the varsity level. The struggles and flashes of greatness were on display in the three games last week against Baldwin- Woodville, Menomonie and Holmen. For River Falls, the Tuesday night game against the Blackhawks had essentially been decided in the first nine minutes of the first half. Baldwin-Woodville had a 24-9 lead with just over nine minutes remaining in the first half. The biggest struggles for the Wildcats were turnovers and giving up second-chance opportunities on the glass. River Falls head coach Ian Sticht spoke about the performance.

“Give credit to Baldwin-Woodville, they recognized mismatches inside, they took advantage of those mismatches inside,” Sticht said. “They only hit three or four threes; a majority of their points came in the paint. They were more disciplined and shooting, we couldn’t put the ball through the basket and that makes everything look worse.

The Blackhawks’ offense was dominant inside the paint. Their scoring load came on the back of seniors Anna Jordt and Madelynn Jensen, two inside post players who controlled the rebounding game and gave Baldwin-Woodville second-chance scoring opportunities that contributed to their blowout victory over River Falls.

The Blackhawks are also a good team defensively and when things broke down offensively for the Wildcats, it became a game of hero ball and undisciplined play. Head coach Sticht said that trying to force things isn’t a recipe for success against a good team like Baldwin-Woodville.

“I think trying to do too much on our own, being undisciplined, trying to do things we aren’t supposed to do,” Sticht said. “We’re trying to force things against a team instead of trying to take what they’re giving us and be patient with that. Trying to dribble through two defenders or finish over the top of people, not making the extra pass.”

It was a tough game for River Falls all around. The experienced roster of Baldwin-Woodville, led by their two aforementioned senior post players, was too much for the Wildcats to overcome. The struggling performance on Tuesday night was a classic example of growing pains for a young roster with limited varsity experience. Even so, Sticht stated that there were some positives to take away from the game.

“We played hard, we always play hard and we never give up,” Sticht said after the game. “That’s a good thing for us. Maybe it’s a sign of our youth. We always play hard whether we’re up two, down two or down 20. That’s a positive to take away from tonight.”

“She gives us a lot of things,” Sticht said. “Her athleticism defensively and her ability to attack on offense. I think she’s one of the players we’ve seen growth from. She’s understanding you can’t run through two people. Now she’s making step-through moves and making the extra pass. She’s understanding the game more and it’s slowed down for her a bit.”

On a larger scale, according to Sticht, the team is getting better and is making progress, it just hasn’t quite translated to wins on the court just yet. He spoke about the progress of the team as a whole.

“For sure we’re doing some things better,” Sticht said. “To be great at something, you have to do it consistently and that’s the issue. We’re getting better at things but we’re not doing them consistently. There are times when we do things really well and there are times when the undisciplined comes out. We’re not as disciplined as we need to be to find actual success yet.”

Sticht summed up the entire game and overall season by saying that to find success, the team will have to have more discipline and consistency on both sides of the floor. River Falls is now 2-9 for the season and is in seventh place out of eight total teams in the Big Rivers Conference.

The growing pains for the Wildcat girls are standard for any young varsity basketball team competing in a Division 1 or Division 2 conference. They continued throughout the Friday night, Jan. 7, game on the road against Menomonie, which was a 72-40 loss for River Falls.

Even in River Falls’ growing pains, there are flashes of brilliance, as was on display in the Saturday night, Jan. 8, home game against nonconference opponent Holmen. In that game, River Falls trailed 9-0 early, didn’t score in the first eight minutes, and still managed to win the game by 27 points in a 67-40 blowout to improve to 3-10 for the season. After the game, coach Sticht spoke about the impressive victory.

“It certainly seems like we kind of found our mojo again,” Sticht said after the win. “Our shooting in the last three, four, five games has just been awful and like a lot of things, shooting is contagious. Lilly (Burke) finally found it again. She’s probably our best shooter, but for I don’t know how many games it hadn’t been there. Getting her mojo back really helped. I would also say Jordan Schwantz imposed her will down low and did whatever she wanted. She did a great job sealing and getting to the free-throw line and also she defended their best player and that was huge.”

In previous games, River Falls had struggled offensively, to say the least. The game against Holmen was a perfect example of what the Wildcats can be if they shoot the ball reasonably well. The standout for River Falls was Burke, who is a certified sniper from three-point range. Midway through the second half, Burke hit back-to-back three-pointers that contributed to the lopsided final score. Sticht spoke about how the team changes when Burke is shooting it well.

“I just feel like (shooting three-pointers) it’s her game,” Sticht said. “Everybody knows she can shoot like that, so bringing it back gives everyone else energy around her. It uplifted us all to see her get going again.”

The Wildcats also got significant contributions from Schwantz, junior Olivia Pizzi, and Peters. It’s a young team that has experienced significant growing pains throughout the 202122 season, but on good nights, has displayed flashes of brilliance. Up next for the Wildcats is a Tuesday night, Jan. 11, game on the road against Woodbury. That game is slated to tip-off at 7 p.m.

RFHS sophomore Jordan Schwantz makes a dribble move on her way to the basket during the Wildcats' home game against Baldwin-Woodville. Schwantz finished the game with 10 points, three rebounds, three steals and three blocks. Photo by Reagan Hoverman

River Falls sophomore Lilly Burke pulls up for three during the home game against Holmen on Saturday, Jan. 8. Burke finished the game with 13 points, which included four threepointers. Photo by Reagan Hoverman 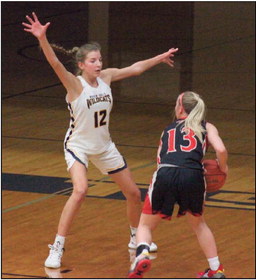 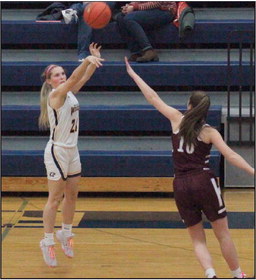