Two games, two wins. With the Oriole boys varsity facing off against Eld Mound away and Lakeland at home, the score at Elk Mound was 55 – 48. While that against Lakeland was 68 – 59, both score tallies in the Orioles favor.

Coming from the tipoff against Lakeland December 30 the first score went to Hen ry Hoel off a pass from Carsen Hause, for 2 – 0 to start out the game. Following an unsuccessful try by Lakeland for three points and Hause taking the ball downcourt into Lakeland territory, the ball passed to Hoel and then Brady Potaczek for an unsuccessful two-pointer— but things were over. With Lakeland taking the rebound it was back and forth, with Hoel taking the ball downcourt and then passing to Lucas Smith for a two-pointer.

With Hause making another two-points it was 6 – 0 Orioles with time to spare. Coach Tom Hause had more to say on Smith and Hause as lead scorers for the Orioles.

“Carsen and Lucas have been our scoring leaders the past two seasons,” Coach Hause said, “however one of things that has made us a better team is that we are getting consistent scoring from our other starters. We have multiple players that could lead us in scoring each night.” As to defense, Coach Hause had the following to say.

With Lakeland taking the ball on rebound before a whistle for going out of bounds, a pass by Cooper Nichols to Hause for the Orioles took the ball downcourt again, with an unsuccessful try at a two-pointer by Nichols and Lakeland going on to score three points in response, bringing the score 6 – 3 with 14:43 left in the half.

As to overall game statistics, Smith came away with 29 points against Lakeland while Hause had 17 points, while Potaczek contributed five free throws and a couple two-pointers to come away with nine points for the game. Overall the Orioles did better in their second half than the first, with a solid 39 points in the second half to build on 29 in the first.

Lakeland in comparison came away with 24 points in the first half and 35 in the sec ond, not enough to turn things around.

As to fouls, the Orioles saw a total of three in the first half and seven in the second against Lakeland, while their opponents took five and eight, respectively. Looking forward to the start of conference play next week with games against Regis, Osseo-Fairchild, and Fall Creek, the battle at Elk Mound December 28 was real.

Starting out the chars for total points against Elk Mound was Smith with 21 points, followed by Hause with 14, with Landon Karlen contributing four free throw points and Logan Burzynski getting two points.

As to each half, the Orioles did better in the second than the first, coming away with 24 points to 14 for Elk Mound in the first and 31 points to Elk Mound’s 34 in the second, as the Mounders fought hard but ultimately were unable to over- turn the final outcome of the game.

Landon Karlen (right) goes in for a hoop shot as Carsen Hause runs to assist.

Photo by Joseph Back.

Brady Potaczek makes a hoop shot against Lakeland December 30. Photo by Joseph Back. 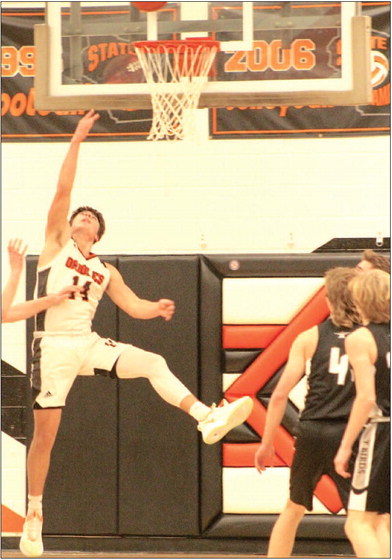