The South St. Paul Shootout turned out to be just what the doctor ordered for the Park Wolfpack.

Park wrapped up a 2-0 holiday week with a 58-40 win over host South St. Paul Thursday. That followed a 68-35 victory over Two Rivers on Wednesday. The two lopsided wins snapped a two-game Park losing streak in the Suburban East Conference.

“I think we pushed the ball well, we read the defense well,” said Jameson. “Some things we did not so well were we didn’t move the ball, sometimes we had a little bit of a stall. But then on defense we got stops. And I think we finished great.” Park led 25-14 at the half and 40-25 with 10:28 to play before South St. Paul made a run. The Packers cut the Park lead to six points before the wolfpack reasserted themselves and pulled away for the 18-point win. Jameson made a key threepoint drive and foul shot to stop the South St. Paul momentum.

“I think we’re connecting better, and I think we’re finally putting our offense and defense together and the hard work is paying off,” said Jameson.

With Park in control, the only remaining drama happened when Nelson was called for an inexplicable technical foul after getting tangled up with a fallen South St. Paul player.

“We stuck together,” said Park head coach Stephanie Tolkinen. “They held it together. We knew that South St. Paul would bring some pressure, we just didn’t know exactly what that intensity was going to look like. We knew that they were going to defensive resistance and make it hard for us and that’s exactly what they did. We just had to ger our kids to stick to the game plan, stick to running the offense, stick together.

“And on the defensive end they cut really hard, they did some really good things and we had to keep them off the offensive boards and I think there were a few times we didn’t get those loose balls,” Tolkinen added. “But all-in-all I think it was a good team win. The kids stayed together, made some free throws inn the end and just never really lost composure. At times they made us uncomfortable, but we didn’t break.”

Park rolled to a 43-21 lead by halftime and was never threatened in the game. 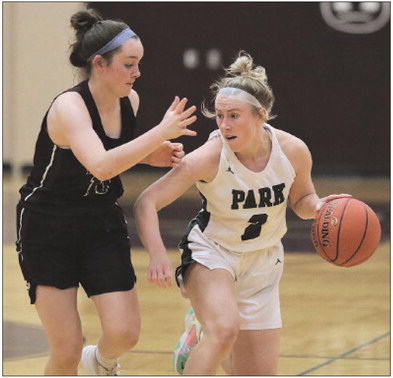