Park’s Evan Bearth goes up for two of his 14 points in the second half against Andover.Photo by John Molene
Sports
Boys’ basketball team downs Andover

Playing across town from where they were originally scheduled, the Park Wolfpack outfought Andover in a 66-56 win Wednesday at Tartan.

The Wolfpack had been scheduled to play Minneapolis South in the Capital City Classic at Concordia-St. Paul. But that tournament was canceled due to illnesses.

Instead, the Wolfpack subbed in the Tartan Holiday Basketball Tournament for one game only and made it a good one.

Park forward Jamari Walker scored 23 points and wing Evan Bearth drained 14 to lead the Wolfpack offensively, but it was the Park defense which dominated the game early and late.

“We had some good spurts tonight,” said Park head coach Mike Weah. “We got our big guy going. Evan and Mari both got going. Defensively we were pretty hot there. We threw some different looks at them to see how they would handle it. When we felt like they couldn’t handle it as good as we thought they might be able to we just stick with it but eventually they got hot and that’s how it stayed a close game.”

Park got off to a fast start and led 17-7 with nine minutes to play in the first half. The Wolfpack held Andover to single digits for the first 13 minutes of the game and led 35-22 at the break.

Andover heated up from the outside in the second half and closed to within 40-034 with 13:48 remaining and then to 56-49 with four minutes to play but could come no closer.

Bearth made three field goals in a 12-1 Park run and the Wolfpack defense reasserted itself to turn back the Andover surge. 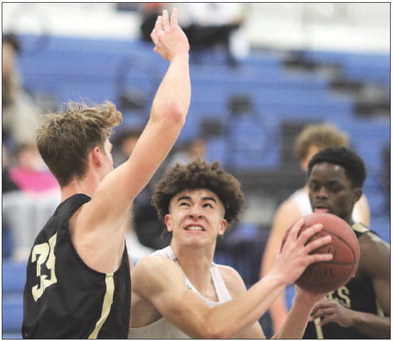 Jamari Walker of the Wolfpack fights his way through the Andover defense near the basket.Photo by John Molene