After resident Phoebe Vodnik posted a question on the “Spring Valley WI Community Group” Facebook page, “Anyone know if they still make the ice rink down at Handy Andy,” residents chatted back and

forth with memories, but then the idea began to form into a plan.

Many credited Barry Wentlandt for maintaining the rink for years, as well as the Spring Valley Fire Department. Some residents even reminisced about a rink that had been located next to the Brother Michael Center in the 1960s and how they loved skating there.

Resident Steve Marek saw the post in the group and decided to take initiative in organizing the project.

“What happened was, Phoebe asked a question about the rink and if it was coming back and I found that post and I thought ‘you know this shouldn’t be that hard’ and it didn’t really look like anyone was taking on the project so I thought I would recruit some people and get the rink taken care of,” he said.

The rink was a tradition for many years before Marek reorganized the project. It only died off because the children who used to use it got older and people moved away, causing a pause.

“The rink has been hit and miss for probably the last five years or so; it was kind of a community staple and it was always very well used but it just kind of fizzled out because the volunteers just didn’t try to continue maintaining the rink,” said Marek.

Marek decided to recruit some fellow Spring Valley residents to get the rink back up and running for everyone to use for the remainder of the winter.

“My role in this is basically taking the bull by the horns and saying ‘let’s do this’ and we got some people together and scheduled out times to get down there to build it,” he said.

One volunteer, Adam Janssen, recently returned to the community and saw this as an opportunity to become more involved.

“I grew up in Cumberland, I'm an active-duty military reservist and we just moved back up here in November and when we moved here we really wanted to find a way for our kids to skate,” Janssen said. “I grew up skating and playing hockey so I was all for helping out.”

The Village of Spring Valley also stepped in to help with the community project, by donating the water usage and the equipment needed to make the rink. This truly was an entire community effort started by one small request on a Facebook group page.

“It’s wonderful that it is a community effort,” said Village Clerk Luann Emerson. “I don’t think people realize that it’s not a flood once, sweep once, and it’s ready to go. Ice rinks are an ongoing maintenance structure that require daily or weekly attention.”

The rink is still being flooded and sprayed to ensure a smooth cover for safe skating. It is ready to use but the process will continue as the winter goes on. Some community members also purchased some added equipment to make the rink easy to use.

The group of volunteers will continue to maintain the rink as the winter season goes on and they plan to continue the tradition in the coming years.

“As long as we are here I will participate in assisting in getting the rink going,” Janssen said.

The ice rink at Handy Andy Park in Spring Valley is a community, volunteer effort that takes many hands. Photo courtesy of Steve Marek 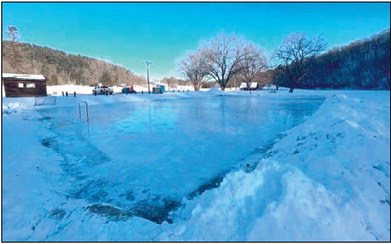