Hastings School Board member Stephanie Malm at the Dec. 15 meeting.
News
School board makes cuts, warns next year will be worse

The Hastings School District was forced to make some extremely difficult decisions at its Dec. 15 meeting, as it approved budget adjustments for the 2022-23 school year that means the elimination of some positions and an increase in fees.

The board has held numerous budget discussions before approving the plan put forward by administration. The total amount of the budget adjustments was $1,471,040.

The plan includes “rightsizing” cuts of three full-time equivalent staff positions at the elementary school, 3.18 FTE at the middle school level and a .5 FTE position at the high school for a total savings of $521,040. The district will use $650,000 of its fund balance and expects by garner $50,000 by instituting user fees for middle school athletics and activities. Secondary programming will be cut to save at least $78,000 and $172,000 in federal Elementary and Second School Emergency Relief funds from the COVID-19 pandemic would be used as well.

At the elementary level, the plan would be to cut the positions in second and fourth grades. AT the middle school, the proposal was to “reduce 7th/8th sections and Math).

The board discussed at length the plan to save funds by reducing the current two-year state requirement for physical education to 1.5 years.

“Nobody wants to make these decisions, but we ran to make these decisions,” said Board Chair Kelsey Waits, as she oversaw her final school board meeting. “As a board, we have given our governance. We’ve said ‘This is what we’re looking for’ from administration. This is the number we’re trying to hit. They have come back to us with the options.”

The phy ed change would open schedules for students to take other classes the first semester of their sophomore year.

“Steph took the words right out of my mouth,” said board member Becky Beissel. “I think it’s too detrimental to the kids’ mental health.”

Board member Lisa Hedin explained that no one on the board wanted to have to make any cuts, but they’re necessary.

“I’m not OK with any of that, but that’s where we are, right?” she said. “We’re not saying you are not going to be able to take phy ed. Our district has a standard that is a year above the state standards. It forces students in 10th grade, fall semester to have to take a phy ed class, which causes all sorts of ripple effects. What we’re saying is we’re not going to mandate for graduation that you take that amount of phy ed. Right now, it’s a pinch point.”

“I see it as irresponsible to not make the difficult choice,” she said.

“They’ll have to choose to take another class,” he said. Waits weighed in. “I’ve been thinking about this a lot the last few days and about physical education and mental health,” she said. “For many kids, yes, physical education is a way to help their mental health. For other kids, having a forced requirement on them during a specific semester is causing them to make some other decisions. For those that find mental health support in physical education, they are still able to sign up for phy ed. For those who have tremendous anxiety due to their body image, they’re no longer forced to take that.

“As Lisa pointed out, it’s not getting rid of a program option. It’s getting rid of the requirement that you have to be in that program in that semester.”

There was talk on the board of examining music and social studies as well.

Hedin said that every program will be up for review next year, when budget numbers are even more dire.

“Next year, these tough decisions will be brutally tougher,” said Hedin. “Every department and every building needs to be on alert. Nobody is going to be spared next year. I’m being brutally honest.”

Said board member Dave Pemble, “You don’t want to sit there and kick the can down the road, because you know the road is going to get bumpier and get hillier.”

Data provided to school board regarding budget adjustments. 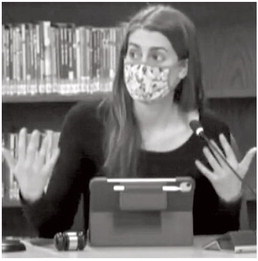 School Board Chair Kelsey Waits spoke during the Dec. 15 school board meeting.