Stanley-Boyd English teacher Kayleigh Steinmetx presented on a program entitled ‘Orioles Acheive Before and After School’ at the December 20 regular board meeting. The program would seek to enlist students as mentors to help close skill gaps with other students. Photo by Joseph Back.
News
Program entitled ‘Orioles Achieve Before and After School’ to mentor students

Approved at December School Board meeting, program would aim to close skill gaps

“The third tier intervention is, I don’t want to say ‘crisis mode,’ but lacking those basic skills.”

Thus did Stanley-Boyd High School English teacher Kayleigh Steinmetz pitch the idea of a student mentor program to be called ‘Orioles Achieve Before And After School,’ to those assembled for the December 20 board meeting in the high school library. The idea behind the proposed program was to bridge the knowledge gaps, using students to help fellow students.

“If you’re sitting in class and you can’t understand what’s being taught, that’s a serious setback,” Steinmetz said. As such, these are the main program details as laid out: Held Tuesdays and Thursday, with mornings K-3 and after school for fourth to eighth grades, with a late bus already in use for grades 4 to 8. Small groups in the library Teacher training for students with a student run program.

Teachers working together to make sure everything goes smoothly.

Prior to passage at the December school board meeting, there were many questions to ask and answer.

“Can I make the assumption that we’re not going to be using a lot of screen time?” Lance Carlson asked, receiving an answer in the affir mative.

Rather than computers to learn, classic non-computerized games like Boggle, Bananagrams Math, and Yahtzee would take center stage in the student-led instruction.

There was also potential pay to consider for the students who would be mentors.

“We had said we’d be willing to pay $10 an hour,” Koenig said of the program, while it was acknowledged that some students might prefer it as a volunteer opportunity. Some board members still had questions, though.

“How would this work with older kids with sports?” Toni Seidl asked.

“It wouldn’t work with sports,” Koenig replied. With the nature of the job entailing work after school on game nights, the schedule clash was an obstacle for athletes, but not a reason to do away with hope for finding mentors for the program.

High School Principal Tanya Mahr said that while the general sense was that those kids most interested in mentoring would also be involved in sports—“and that’s true”—she didn’t see a problem with finding the pool of possible stu – dent mentors, in spite of the program’s unworkability with sports, as noted by others.

“I think that our group of people is pretty solid,” Principal Mahr said at the meeting. “I don’t think it would be hard to find those kids." The student mentoring program would run all three trimesters, with each trimester costing $1,000 a piece of earmarked ESSR money. Employing middle and high school students to build basic skills and relationships across grade levels, the program, as stated, would use games—leading to a basic question that wasn’t so basic.

“It’s easy to say, you’re seriously going to pay people to play Yahtzee?’,” Koenig said, noting that what might seem common sense to some wasn’t to others, insofar as basic skills went.

“You said it’s common sense,” Koenig said in reply to a quesiton from Board member Ryan Lewallen. “And that the thing, it’s not common sense.” Board member Chad Verbeten had his own perspective on the matter.

"I'm not interested in can you tie a specific number to this program,” he said, a lawyer by trade. "I'm more interested in can we find kids for this. I’m going to go back to what I do. If this keeps one kid form coming to see me, it’s paid for itself,” he said.

Now approved with a motion by Verbeten that was seconded by Denise Hoffstatter, Ori- oles Achieve Before and After School officially has a future, the board vote unanimous for its passage. 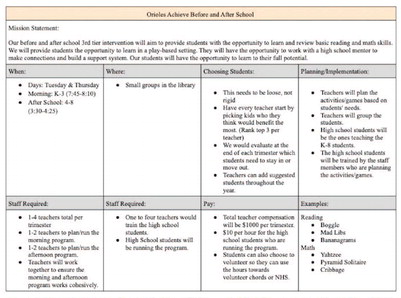 A rough idea of what the Orioles Achieve Before and After Program would entail and look like, taken from the School Board meeting packet for December 20.