Park struggled at both ends of the ice in a 6-2 loss to host Burnsville Monday, Dec. 27, at the Burnsville Ice Center.

In some ways the game was reminiscent of last season’s final game, a 7-0 Burnsville victory in the Section 3AA quarterfinals.

On Monday, Burnsville powered in the first three goals of the game in the first period. The Blaze scored just a minute into the contest to get off to a fast start and never looked back.

Avery Tait scored for Park near the end of the first period to close the gap to 3-1, but Burnsville never really got out of their comfort zone.

“Tough game all around, offensively and defensively,” said Park head coach Bay Shock. “You’ve got to show up. You’ve got to come ready to play and I thought from the drop of the puck we weren’t winning the battles. Burnsville’s got 10 kids over there because of health issues so we should be out-working them and getting them tired and we didn’t get to that game plan.”

Park’s Lauren Osland scored to open the third period and cut the margin to 4-2, but Burnsville answered back with another score a minute and a half later to extinguish any hopes of a Wolfpack comeback.

Burnsville had a whopping 48-15 advantage in shots on goal.

“What did we do well, there were some flashes,” Shock said. “I thought Osland had some flashes with her speed. She’s one of the fastest kids every day. And she blew around and scored that goal in the third to make it interesting and we had our other goalie (Aubree Laska), that was her first 17 minutes of varsity experience in the third, so that was nice to see.”

Kendall Schumacher, Cassidy Moen and Natalie Post picked up assists for Park in the game.

Park managed just a dozen shots on goal and none reached the back of the net. Park goalie Tori Stepka stopped 25 of the 29 shots she faced.

Park (5-6) plays Hastings (4-9) in the second round of the Burnsville tournament Tuesday, then takes on Apple Valley (5-6-1) in the tournament on Wednesday. Both games start at 5 p.m. 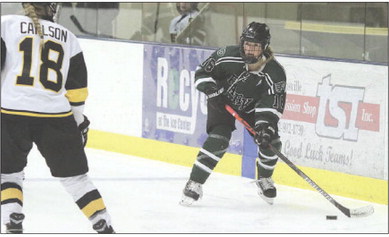 Molly Villas of the Wolfpack looks for an opening in the Burnsville defense in the third period Monday. Photo by John Molene.