South St. Paul’s Devin Newsome ties up Park’s Jamari Walker in the lane in the first half of the Packers’ 68-52 win. Photo by John Molene
Sports
Park steamrolled by South St. Paul

Fresh off a historic win over Cretin-Derham Hall, Park’s Wolfpack got a basketball lesson from a very talented South St. Paul in their home opener Tuesday, Dec. 21.

Visiting South St. Paul did just about everything better than the Wolfpack Tuesday, scoring an impressive 68-52 victory. The Packers played better defense, rebounded better, got much better shots and seemingly won every contested ball.

It was a bit of a shocker for the Wolfpack, who came into the game as the ninth-ranked team in Class 4A but never seemed to get their footing. South St. Paul, on the other hand, looked every bit the No. 3 team in Class 3A.

The Wolfpack defense entered allowing just 47 points a game after five contests. But South St. Paul had scored 48 with 11 minutes to play.

The Wolfpack defense got caught flat-footed numerous times, and each time usually resulted in a silky drive to the basket by one of the Packers, especially Devin Newsome who scored 21 points and Alonzo Dodd who had 15.

At the other end of the court the Packers usually made the Wolfpack work hard for every clean look at the basket.

“I’ve got to draw up some better stuff,” said Weah. “I’ve got to get our offense flowing.”

South St. Paul led 26-18 with four minutes to play in the first half and 33-23 at the break. The second half wasn’t any better for the Wolfpack. The Packers led 48-31 with 11:07 to play and by that time a lot of the fight had gone out of the Wolfpack.

All-in-all it was tough opening night before a near standing-room only crowd.

Park slipped to 4-2 on the season.

South St. Paul remained perfect on the season, improving to 5-0.

Weah said the thing he hopes his players take away from the game was “how tough you’ve got to be to play this game against a team like that. That team is a really good team, one of the better teams in the state for sure. But we feel like we can compete with anybody. If we truly feel that we can compete with anybody then we’ve got to prove it, especially in games like this. I thought that we could have competed with them. I just think there was little things that we can control that we just weren’t taking advantage of.”

Park regained the services of Jamari Walker who returned from a two-game absence and scored 13 points. Evan Bearth netted a teamhigh 15 points. Still missing is star forward Pharrel Payne, who remains sidelined with a hip condition. 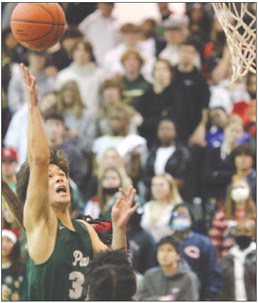 Park’s Josh Hatano puts up a shot as he drives the lane against South St. Paul. Photo by John Molene