The River Falls High School boys hockey team is a young roster, with a young coach, and a program history that hasn’t been consistent, to say the least. Now, head coach Cam Wilken and his coaching staff are trying to build a foundation for the program that will lead to prosperous seasons in the future.

In this winter sports preview, RFHS head coach Wilken took some time to speak about his roster, his coaching staff, the program, and what the future looks like for the River Falls hockey team. He began by speaking about the roster.

“We are really young,” Wilken said. “We only have four seniors. Our young guys are really buying into the program and will be very skilled down the road. It’s a great foundation to build on going forward.”

Oftentimes, the building of a foundation in sports is challenging and involves losing games before success comes later down the road. This season, River Falls is 3-4-1 overall and lost its most recent game 3-2 on the road against Baldwin- Woodville, a game that went into double overtime and ended with a Davis Paulsen goal to secure the victory for Baldwin-Woodville.

One of the strong points for the Wildcats this season has been the play of goaltender Jayden Serene, who has been stable in the net and has played well for River Falls throughout the opening month of the regular season. Wilken spoke about Serene and other important players on the roster.

“Jayden Serene is our rock in the net,” Wiken said. “In our minds, he’s the best goalie in the Big Rivers Conference and is only a junior. Teddy Norman, Mathew Marsollek, Wyatt Bell and Andrew Amundson are all scoring goals for us and will all be back next year. It’s great for the program that we basically have an entire year to work out all the kinks with the same team more or less coming back.”

Wilken has stated throughout postgame interviews this season that the Big Rivers Conference is one of the best high school hockey conferences in Wisconsin. The Big Rivers is full of high-quality athletes from top to bottom. Not to mention, the conference has Eau Claire Memorial, a team that is 5-1-1 overall and is one of the best teams in the state. As well as Hudson, which is 7-1 overall and is ranked second in the state. Wilken spoke about the one simple goal that he has for this team.

“Just to build for the future,” Wilken said. “Our message is to lay a brick down every game. Build up for what we can be going forward, regardless if we are 24-0 or 0-24 this year.”

Last year, River Falls only had one win the entire season. This is Wilken’s first year as head coach and they have three wins before the calendar flips. Throw the conference standings aside. In a brutally challenging conference in his first year as head coach, Wilken is keeping River Falls hovering around .500, and that’s a significant improvement compared to last season’s results. Part of improving is building a great coaching staff, and Wilken believes he has done that.

“We have an amazing staff of coaches,” Wilken said. “John Linehan and Jerry Sneddeker are our varsity assistants. John (Linehan) has had years on the RFYHA board and has coached at all youth levels. Jerry (Sneddeker) played hockey for Hastings High School and went to play some Minor League Hockey. Tim LaVold and Eric Bark cover the JV team. They do an amazing job of coaching skills and developing our younger players for the next level.”

Wilken and the coaching staff will continue to establish the foundation for what they hope will become a powerhouse program in the coming years. The next game on the schedule for the Wildcats is on Tuesday, Dec. 28, at the annual Wisconsin Dells tournament. The Wildcats will play Reedsburg first at 7:30 p.m. 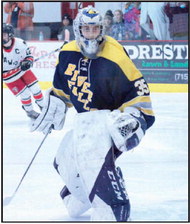 River Falls High School Wildcats junior goaltender Jayden Serene turns around to track the puck as it goes behind the net during the second period against Baldwin-Woodville on Thursday, Dec. 23. Photo by Reagan Hover- 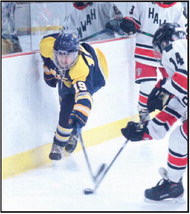 River Falls Wildcats captain and junior star Wyatt Bell reaches for the puck in a scrum near the glass during the road game against Baldwin-Woodville. Despite going to double overtime, River Falls couldn’t score a goal to get the win and lost in double overtime 3-2.