Both the boys and girls hockey teams had a rough week on the ice, each team suffered at least one lopsided loss and one game postponement due to non-covid related illnesses on the other teams. The girls had Tartan postpone on Friday and the boys had the game against Simley postponed on Saturday. The rest of the week was eerily similar for both teams too.

The Girls faced Two Rivers / St. Paul Riveters on Tuesday, December 7 at West St. Paul Arena. The game was tied 0-0 headed into the second period with each of the defenses keeping the other at bay. The second period, the Riveters took control and never really looked back. They scored twice in the second and had a three point lead in the third before Hastings scored their first goal of the game. Lauren Muhl scored the only Hastings goal of the game with the assist going to Lauren Skov and Ireland Zaruba. Two Rivers added two insurance goals to win 5-1.

Hastings goalies faced 38 shots on goal while the Riveters only faced 26. Both teams were 0-for-4 on the powerplay. All eight penalties were 2-minute minors.

The girls then travelled to Simley on Friday and did not fare much better. Same story, tied at 0-0 after the first, both defenses doing well against the others offense. Unfortunately for Hastings, the Spartan defense picked up their game and kept Hastings to single digits for shots on goal. Unless you are extremely efficient at your shots, that does not bode well for any offense. Lauren Hubbart started the scoring of the game with an unassisted even strength goal 2:13 into the second period. Simley stormed right back with three consecutive goals in the second and they added one more in the third to finish off Hastings 4-1.

Hastings goalies Nicole Vander Heyden and Alexis Steinke faced 32 shots while the Raiders only managed to get nine shots on the Spartans. Hastings was 0-for-1 on powerplays and Simley was 1-for-2. All three penalties were 2-minute minors.

The boys went to rival St. Thomas Academy on Thursday night and once again, played a good game of Hockey but simply could not find the back of the net as often as they needed to. The first period, the Cadets scored first but a fired up Raiders team was not going to go down without a fight. Stephen Reifenberger took a pass from Logan DeBettignies for the first Raiders goal of the game and the boys headed to the locker room tied with a perennial state contender.

“There was nothing by accident that period we played really purposefully, and you know, the kids worked hard and the bench was just a really good place to be. We’ve got a good vibe, the kids are enjoying each other. And it’s easier to work when you’re doing that too,” Head Coach Matt Klein said after the first period.

“The biggest thing in the second period is the long change. We just got to be smart with our quick ups and how we get pucks into their zone. Because if they’re not in the right place, then you know, it’s a tougher period to play. So hopefully we can take advantage of their stuff to hurt them,” Klein added.

Unfortunately for Hastings, STA took advantage of the Raiders in the second period extending the lead 5-1 and they added two more in the third to finish the game 7-1.

Hastings outshot STA in the first period 8-5 but then the Cadets poured it on, ultimately outshooting the Raiders 3620 for the game. Kody Niederkorn had a rough night in net for Hastings with not getting a ton of help from his defenders. Time and space are a dangerous combination for skilled shooters and not clogging the shooting lanes makes the score go from 1-1 to 7-1 in a hurry, not a normal combination for the Raiders defense.

Penalties in the game favored Hastings with the Raiders sitting in the box for only four minutes on two infractions. The Cadets sat three times for six minutes. Both teams were perfect defending the powerplay.

The boys travel to TCO sports garden to take on Mounds View on December 22 at 7:00 p.m. then the quick trip up to Doug Woog Arena in South St. Paul to face the Packers on December 27 at 6:00. 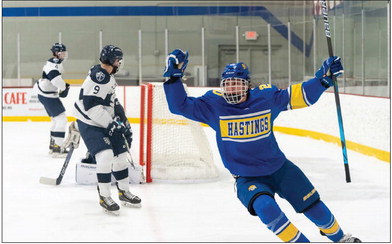 Stephen Reifenberger scored the lone goal in the game against St. Thomas Academy. The goal came at the 11:25 mark of the first period. Photo by Bruce Karnick