It was on the short list of then Mayor David Jankoski’s buildings to save, as recently as the last decade.

Deteriorated inside if closed from the elements, the 1906 Stanley depot that closed first to passenger use in the 1960s and then to use as a warming station for passing train crews (Stanley: Our Town 1881-1981), saw its northeast front wall torn out in the recent tornado of December 15, while much of the apparent damage preexisted the recent storm, as revealed in photos from December of 2020.

Seemingly closed for good in 1968 but given a new roof in 2006 lest the disused and deteriorating landmark pass beyond saving, the multi-room depot on First Avenue at Emery Street took the brunt of the tornado’s fury December 15, being in the twister’s direct path.’ Had the tornado not shifted its path as it approached Sawmill Road, however, it would have come through the east side of Sunset Homes past the historic company store up the street, before plowing through the former Cannery and across North Emery Street, exiting town at H and Tenth Avenue.

As it happened, the tornado’s path shift south of Sawmill Road and east of the prison saw it pass by the corner of Oak and Helgerson, east of the local Stanley Area Historical Society, which largely escaped the tornado’s fury so far as visible damage was concerned.

Not so the train depot. Rather than glide past, the tornado of December 15 collided head on with it, continuing northeast and relatively unbowed, with maximum wind speeds estimated at 120 miles per hour. As public heirlooms go, the depot was intensely unlucky, as most other historic buildings in the city escaped relatively unscathed.

Among the historic buildings that largely escaped was a 1910 boarding house on Third Avenue that lost its handicap accessibility ramp, along with the historic A. Burgduff residence at Fourth and Franklin.

Further south and outside of the tornado’s direct path, the Stanley Brethren church survived as well, while the house at 215 Garfield Street once serving as a schoolhouse when Stanley was young, then located where Holy Family now stands, saw little visible damage as well. So what about the train depot, apart from the roof, that is?

Official word on awaits a closer look, but a peek inside does reveal hints.

In the first place, a steel I-beam above the sucked in back window on the depot’s east side revealed the words ‘Eau Claire Wis.,’ designating where the beam had come to Stanley from. As to the inside, it appears from photos taken in December of last year that much of the apparent damage revealed to light Wednesday from a layperson’s standpoint, preexisted the tornado of December 15, being hidden from view by the building’s exterior facade, boarded over and covered up to save it from the elements.

As to the east side, both the location of the back window in the doorway with side and top views of debris scatter- ing suggest that it was pushed through and/or sucked out of place by the tornado, while other window blocks on the back left (west) of the building did not fail but instead remained in place, if somewhat jarred from their moorings.

Both window spaces in their rectangular shape and supported above by I-beams held against winds with an estimated top speed of 120 miles per hour, while a smaller east-facing window block in the same room as that win- dow which was pushed and/or sucked out before catching in a door between rooms, also did not fail, but remained in its place.

There is still the brick wall to consider, which failed in the front northeast corner but not elsewhere, being made of hollow reinforced blocks for part of its construction. But the most pertinent and seemingly inexplicable thing from the standpoint of strong rotating winds?

The Merry Christmas sign, perched where is was all of a year ago in photos from December 4, 2020, just as though nothing happened.

Explain that with a dead-on tornado strike.

The Jaycee Merry Christmas sign (right inset) as it appeared after the tornado of December 15, and (larger pic –

ture) how it appeared from inside the depot on December 4, 2020, around a year earlier. Photo by Joseph Back. 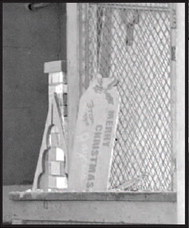 Most Read
News
Meeting Thursday on planned ‘life cycle’ development
A meeting will be held Thursday, Jan. 26 at the Hastings American Legion Post from 6-7:30 p.m. to introduce plans for a new housing development on pr...
A: Main, Main, News, School
Hastings School District food service workers intend to strike Feb. 7 unless agreement is reached
by Bruce Karnick [email protected] January 26, 2023 – Hastings MN. Negotiations between the Independent School District 200 (ISD...
News
Walden of Hastings
News
Chamber dinner celebrates success, honors three of community’s best
A packed house was on hand Thursday, Jan. 26 at the iconic Little Log House Pioneer Village as the Hastings Area Chamber of Commerce celebrated the p...
Public Notices
HASTINGS Police Reports
HASTINGS Police Reports January 16 6:44 a.m. - A two-vehicle accident was reported at the intersection of Highway 316 and Spiral Boulevard. One...
News
‘I’ve pretty much done it all’
[email protected] 35 years ago, George Michael’s “Faith” was topping the charts, the most perfect movie ever was in the theaters (The P...
Community, News
A differing stance to Hudella
To the Editor: I read Representative Shane Hudella's Legislative Update (January 26). I agree with one point in his piece. If abortion clini...
News
School food service workers intend to strike Feb. 7 unless agreement is reached
Negotiations between the Independent School District 200 (ISD 200) and the Service Employees International Union 284 (SEIU 284) have all but stalled s...