The planned Logistics Parks off 100th Avenue has cleared the Council for initial steps, and will continue forward. Ten percent or 25 acres must be dedicated to park or else subject to cash payment received in lieu of park, per city stipulation. Should the logistics company wish to designate less for park, the fee is $6,0000 per acre. Image from Council packet for December 15.
News
Council greenlights Master Site Plan for Northpoint development

Meeting December 15 in the St. Croix Room at City Hall, the Cottage Grove Council tackled many questions. Prominent among them was the adoption of Resolution 2021-166, approving a Master Site Plan for the future Northpoint Development top be built off of 100th Avenue, providing “approximately 3.4 million square feet of warehouse, manufacturing, distribution, and office building space.”

Along with the approval of the Master Site Plan for North Point was a motion to adopt Ordinance No. 1050, approving a zoning amendment to rezone 252 acres of land within the proposed development from AG-1, Agricultural Preservation and AG-2 Agricultural, to I-2, General Industry, with a Planned Use Development or PUD.

Following this were several other motions related to the NorthPoint Development, including those related to a modification to the development program and a TIF district, along with a “motion to authorize to contract for private development by and between the Cottage Grove Economic Development Authority and NP BGO Cottage Grove Logistics Park, LLC,” as stated in the packet.

The Limited Liability Company (LLC) for the Logistics Park as formed under Chapter 322C of the Minnesota State Statutes, has a filing date with the Minnesota Secretary of State of September 29, 2021, with a home jurisdiction of Delaware and a home office in Riverside, Missouri.

Shifting from the North-Point Development to the city checkbook for the first half of December, the details of the most recent billing cycle for Cottage Grove can be found under agenda item 08A of the December 15 meeting, on the Cottage Grove website. Following is a list of the top ten expenditures, listed in order from largest to smallest.

Following Cardinal Home Builders in third place for notable expenditures the first two weeks of December is Ryan Contracting Company, with a payment dated December 9 of $130,030.94 for the River Acres Water Main, the final payment of 10 total for work done June 29 through October 13.

Fourth in line for city expenditures is a payment of $122,596.65 two Pember Companies for the third payment related to Oakwood Park improvements through November 12, followed with one totaling $102,656.41 from the biweekly payroll to the Public Employees Retirement Association, thereby funding retirement for public employees.

Of this, the Mayor and Council together receive just $158.50 towards their retirement plan, the mayor’s annual stipend for work being just over $10,000, that of each council member just over $8,000 for public service rendered.

Meanwhile, sixth in line for recent city expenses is a payment of $64.919.52 to KLC of Willmar Inc. for reduction of grading escrow at Rolling Meadow, while seventh place in the declining balance of major expenditures goes to Keys Well Drilling Company for $49,459.37, being the tenth payment for the cost of well sealing at River Acres from August 28 through October 15. The River Acres neighborhood stationed west of 3M was tied into the city water system after wells on the site were found to be contaminated with perflourylakyl substances, or PFAS.

Although common in many everyday products, the compounds deemed “forever chemicals” attach to water with a hydrophyllic (i.e. ‘water loving’) end and then move through the environment, persisting for long periods on account of the strong bond between carbon and fluorine.

Eighth in the list of notable expenditures recently goes to Menard, Inc, with a refund payment of $48,750 in landscaping escrow balance.

Ninth in the list of payments is one related to tree planting, with $45,920 going to the Willow River company for 2021 tree planting in Cottage Grove.

Last in the list of notable payments is one related to defense against the Emerald Ash Borer, with a payment of $38,508.12 to the Rainbow Tree Company for EAB Injection Medication. Placed in young ash trees, this injection protects the trees against developing an emerald ash borer infestation, and so avoiding both falling limbs and tree death.

A picture showing the many possible origins and sources for PFAS pollution. The River Acres neighborhood located west of 3M was tied into the city water this past summer after some private wells down at River Acres were deemed to have PFAS levels unsafe for drinking by neighborhood residents.Image from Minnesota Pollution Control Agency website. 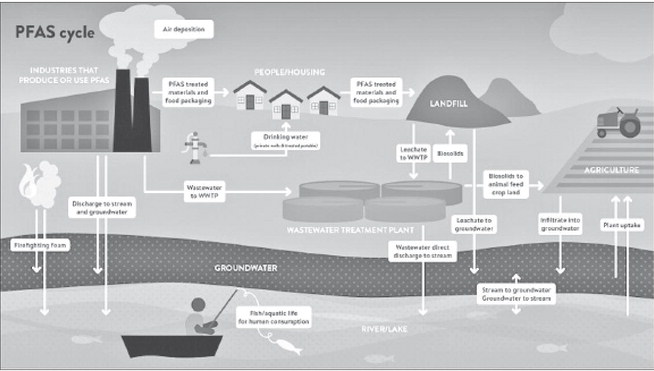 Most Read
News
Meeting Thursday on planned ‘life cycle’ development
A meeting will be held Thursday, Jan. 26 at the Hastings American Legion Post from 6-7:30 p.m. to introduce plans for a new housing development on pr...
A: Main, Main, News, School
Hastings School District food service workers intend to strike Feb. 7 unless agreement is reached
by Bruce Karnick [email protected] January 26, 2023 – Hastings MN. Negotiations between the Independent School District 200 (ISD...
News
Walden of Hastings
News
Chamber dinner celebrates success, honors three of community’s best
A packed house was on hand Thursday, Jan. 26 at the iconic Little Log House Pioneer Village as the Hastings Area Chamber of Commerce celebrated the p...
News
Black Dirt Theater returns with dinner theater featuring ‘I Love You, You’re Perfect, Now Change!’
Following the triumphant return to the stage with “Newsies!” in 2022, Black Dirt Theater is thrilled to continue bringing dynamic, lively and fresh t...
Public Notices
HASTINGS Police Reports
HASTINGS Police Reports January 16 6:44 a.m. - A two-vehicle accident was reported at the intersection of Highway 316 and Spiral Boulevard. One...
News
‘I’ve pretty much done it all’
[email protected] 35 years ago, George Michael’s “Faith” was topping the charts, the most perfect movie ever was in the theaters (The P...
Community, News
A differing stance to Hudella
To the Editor: I read Representative Shane Hudella's Legislative Update (January 26). I agree with one point in his piece. If abortion clini...