Kayla Kressin: Kayla Kressin of the Ellsworth Panthers basketball team makes a tough contested layup in the Friday night, Dec. 17, home game against New Richmond. Kressin's plan was a highlight of the night for Ellsworth, despite falling 57-50. Photo by Gaylen Bicking
Sports
Panthers battle, but fall to Tigers

On Friday, Dec. 17, the Ellsworth Panthers returned to the gym for a non-conference game with New Richmond less than 24 hours after returning from Amery. Despite great effort and a grand battle throughout, too many uncontrollables took their toll on the Panthers, as they fell to their former MBC foes, 57-50.

“We had one of the more challenging games I’ve witnessed tonight,” said Head Coach Jason Janke. “We had some things occur that are just unfortunate in a high school basketball game. The kids weren’t really allowed to decide the outcome in a manner in which you’d like to see. However, that’s basketball sometimes. It’s the only game where you get disqualified without unsportsmanlike behavior and when you practice a certain way and are forced to play the way things went tonight; it’s tough to swallow, but we’ll be fine. Our kids are resilient and determined to not let tonight put a damper on their strong start.”

Morgan Halverson was a leader in the valiant battle for the Panthers, leading the squad with her first high school “doubledouble”, tallying 14 points and 10 rebounds; while Ava Brookshaw kept the foul-plagued Panthers in the game with her three-point marksmanship, scoring 12 points. Sophomore Taylor Peterson played her best varsity overall game to date, scoring all 12 of her points in the second half, while also grabbing two steals. Kayla Kressin was also critical in the end-to-end battle with nine rebounds and two steals. Maria Harrington, despite being severely limited due to foul-trouble, drained two critical secondhalf three pointers for her six points.

“Our kids really persevered despite the very unusual circumstances surrounding our foul trouble,” said Janke. “Taylor really stepped up for us, as she and Morgan were central in working against New Richmond’s trapping defense. I was really proud of how Morgan, Taylor and Ava shot the ball in some real tough spots for us on offense. All the kids battled hard, and in the end, I think they deserved a win, but the basketball gods weren’t having it on this night. We’ll be back.”

Ellsworth will meet two non-conference opponents on Dec. 28 (Maple-Northwestern) and 29 (Clear Lake) in the Menomonie Holiday Classic before embarking on the 2022 portion of their schedule. 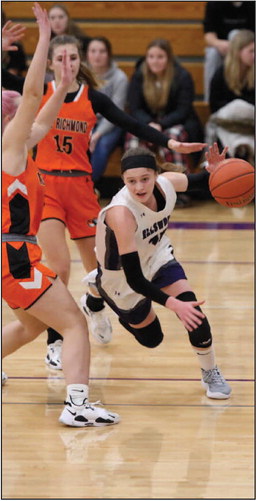 Morgan Halvorson of the Ellsworth Panthers drives on the baseline and looks for an open teammate. Photo by Gaylen 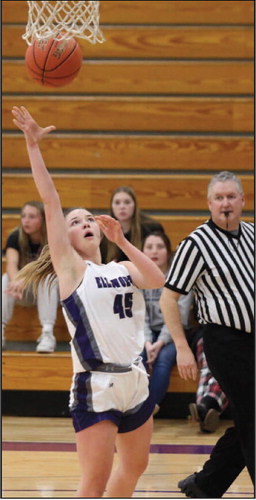